Disclaimer: We conducted this study with a real world scenario in mind.

This test was meant to demonstrate the functionality of a real world scenario of a system with AGM versus lithium batteries. We do acknowledge that some customers are aware of temperature and load effects on the AGM battery cutoffs, but a vast majority do not know or do not update their programming to reflect this based on their given circumstances. We have found that a majority of our customers that call in have not adjusted their system parameters and prefer this way.

Our team performed our testing to model system parameters similar to actual customer systems and that would fully preserve the life cycles of an AGM battery to get the most usage out of it.

In this study, at room temperature at 80A, our LiFePO4 batteries delivered 191Ah out of 200Ah, where AGM delivered 11.3Ah out of 210Ah available. That means your LiFePO4 battery has 95% more deliverable power at an 80A draw than an AGM battery.  Keep reading to find out what happens below freezing and exactly why #LeadisDead.

The most asked questions about our batteries deal with cold temperature charging.

“Do they still work in cold temperatures?”

“Can I charge my batteries in colder climates?”

Every one of our batteries are built with an internal BMS (battery management system) programmed to preserve the life and health of the battery. If the battery is in a cooler environment, the BMS will trigger and keep the battery from taking a charge as long as the temperature is below 32° F. This is one of the many ways our BMS helps preserve your battery. To learn more, check out our FAQ page.

Many myths surround LiFePO4 batteries, especially when it comes to their operation in cold temperatures. One of our driving missions at Battle Born Batteries is to help educate people on our batteries inside and out. Not only is LiFePO4 chemistry much safer than a standard AGM lead acid battery, but they are much more efficient and deliver the power they promise.

Our team of engineers helped design and run this experiment at our facility to highlight just how well our LiFePO4 batteries work when compared to the standard lead acid AGM battery in colder temperatures.

Note, we presented our results in amp hours as this is the most widely used way to represent battery power.

Check out this video we put together that summarizes this experiment.

At 25° F, a Battle Born battery will no longer accept a charge. This is to preserve the cells in the battery, and the internal BMS will allow a recharge when the temperature is above 32° F. Every single battery that we assemble has this intelligent internal BMS.

Lead acid AGM batteries do not have an internal BMS, meaning they may operate at colder temperatures for a bit, but you risk damaging the entire battery and losing power for good. Damaging a lead acid battery can be very dangerous for you and your rig and should be avoided.

Our mission is to educate people on the benefits of lithium batteries and how they can add value to your experience in a boat, an RV or off grid solar system. That’s why we put these batteries head-to-head in a cold temperature charging battle that will send shock waves through the industry.

Before we get into the study, we need to talk about the Peukert Effect.

Peukert’s Law is only accurate if the battery is discharged at a constant rate and constant temperature.

This law does not consider the temperature and age of the battery. This effect is amplified at colder temperatures or with older batteries.

The point of our study was to show the Peukert Effect in action. We used brand new batteries, so our focus for this experiment was purely on temperature.

The LiFePO4 batteries and the AGM batteries were tested under a constant current discharge rate.

The batteries were tested at four different temperature ranges:

The batteries were tested at four different load ranges within each temperature range: 30A, 50A, and 80A.

We did NOT do the testing of a 10A load as it pulls such a minimal draw, meaning the results were more of baseline or control.

During each test, both sets of voltage and current were continuously recorded. If you’re curious about what equipment we used, check out our white paper.

After this second discharge test, the battery banks were fully charged at room temperature before a new round of tests were conducted.

Though the battery banks were of comparable Ah size, the deliverable power of the lead acid at the high discharge rates and lower temperatures rendered this battery bank nearly useless.

The LiFePO4 batteries outperformed the AGM batteries in every test we performed. Note, we presented our results in amp hours as this is the most widely used way to represent battery power. See our results below. 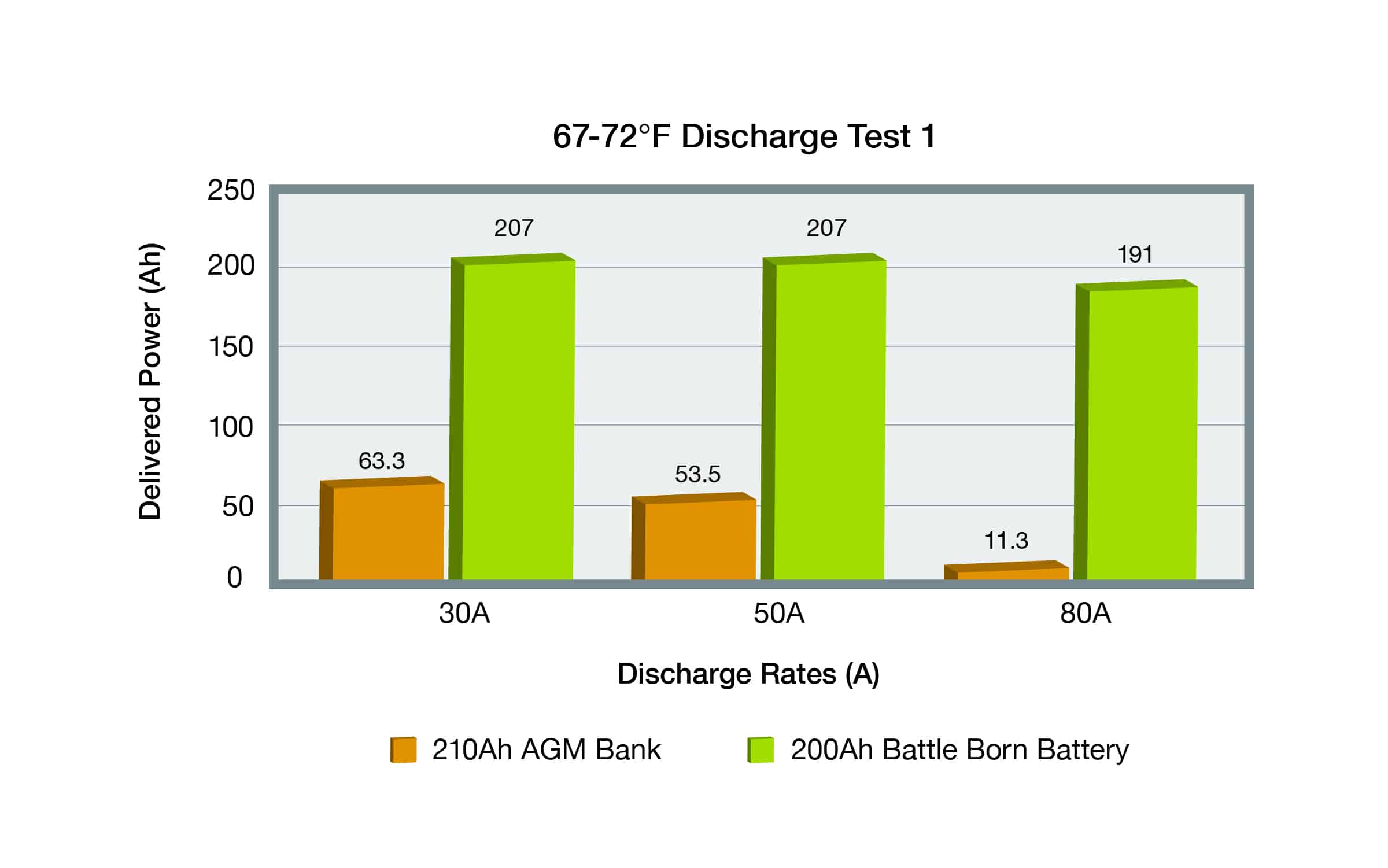 While discharging a battery at room temperature on a 30 amp draw is not a huge load, it was important to set a barometer for the test.

Even though our batteries are rated at 100Ah, sometimes you will get a slightly higher Ah (103Ah for example) out of the battery. Due to the quality control we do, we never send a battery out lower than 100 Ah. In short, 100Ah is the minimum amount of power you’ll get from our BB10012 batteries.

But check out what happens when we test at 80 amps:

The AGM lead acid batteries delivered 11.25 amp hours out of 210 promised amp hours. That means about 5% of the battery capacity is usable.

The batteries were brought up to a 100% charge to even the playing field and tested again. This time we tested the batteries at 33-37° F, almost freezing but not quite. Discharged at the same rates, the LiFePO4 batteries still outperformed the AGM batteries at every level.

At 30A, the LiFePO4 Battle Born Batteries provided 4.8 times more energy than the AGM batteries.

At 80A, the LiFePO4 batteries provided 17 times more energy. Think of all of the things you could power with that much energy!

LiFePO4 batteries are outputting almost 100% of their promised Ah at this cooler temperature. Versus the AGM batteries, which lose yet another third of their energy at this temperature. The next range of temperatures is, truthfully, the most controversial range when it comes to cold temperature and lithium batteries.

This is the most heavily discussed range because at 25° F the Battle Born battery will no longer take a charge due to the BMS. And it won’t recharge the battery until it comes above 32° F. This is to protect the battery in these cooler temperatures. Naturally, most of our customers are curious and ask questions about this temperature range specifically.

During the 80A discharge test, the AGM battery bank delivered less than 1 amp hour of energy before the low–voltage cutoff was reached. By contrast, the LiFePO4 batteries were able to still deliver 175Ah, more than an AGM battery delivers at room temperature.

What happens to the batteries when we drop the temperature even lower? The final test was performed in the 13-18°F range.

At these cold temperatures, most RVs and boats will be experiencing other mechanical or electrical problems. Unless your rig is specifically built to operate in this kind of cold climate, we wouldn’t recommend it.

The AGM batteries delivered a fraction of their promised capacity again, which is even lower at this colder temperature. The results of the next 80A test are truly jaw-dropping.

The AGM batteries were still unable to produce even one amp hour of power at 80A. It only delivered 0.65 amp hours, which won’t power much. Granted, it performed slightly better than at the 26-30 range, however, it’s still an underwhelming amount! The AGM batteries deliver small amounts of power at this cold temperature.

Because of the freezing temps, the AGM batteries may show varying and unreliable voltage readouts. Running any batteries at this temp is not recommended.

Just because LiFePO4 batteries cannot be charged in the cold does not mean that you can’t use them in the cold!

That’s a lot of data to process. Let’s break it down.

We should note that the Peukert Effect is visible in this study, especially for lead acid AGM batteries. As you increase the discharge rate, you decrease the capacity. We have seen this demonstrated directly in our study. The more we increased the discharge rate (along with the temperature changes), the less power the batteries could deliver.

More importantly, look what happens to the AGM lead acid batteries at the coldest temperatures. At 13-18° F, the capacity diminishes from 31.94 amp hours to virtually zero.

The increased resistance at colder temperature is extreme for lead acid batteries.

The point of this study is to demonstrate that even though our lithium iron phosphate batteries have a low temperature cutoff, you cannot extract or put in current into a similarly sized lead acid or AGM system at cold temperatures.

We at Battle Born Batteries are aware that many of our customers want to be able to charge and discharge their batteries readily at very cold temperatures.  We’ve come up with multiple solutions.

For starters, we have our own external heating solution at Battle Born Batteries. You can purchase our external heating wrap and safely heat and keep your battery above freezing. This will allow your battery to charge and discharge at the appropriate capacities. It is important to note, do not use a lead acid heating blanket or a heating pad with LiFePO4, as you may damage the battery.

The Battle Born team has been developing an option for internal hearing for our next generation of batteries. We’ve developed an internally generated heating solution which helps keep the battery just above freezing.  The power for this heat comes either from your charger or from the battery itself, ensuring that you can always keep the battery within the appropriate temperature levels for operation. These batteries are coming soon so stay tuned! Follow us on our Instagram and Facebook for special announcements.

There are many heating solutions for our LiFePO4 batteries. If you are curious about which ones might work for you and your system, give us a call at (855) 292-2831 or email us at [email protected].

The internal BMS is meant to protect your battery – something that AGM batteries have no way of doing. Not allowing a charge at freezing temperatures preserves the LiFePO4 battery so you are still able to use it!

Don’t worry – you’ll still get more energy out of a Battle Born Battery below freezing than you will out of an AGM battery at any temperature. It’s important to remember that we performed our testing to model system parameters similar to actual customer systems and that would fully preserve the life cycles of an AGM battery to get the most usage out of it.