Battle Born Batteries lets you live your life more while charging your batteries less, which is perfect for full-time RV living. For Kenny and Sabrina of the YouTube channel Moving Forward Adventures, they can’t have lead-acid batteries slowing them down. Since Sabrina is an Osteopathic Physician that works as an independent contractor, the couple drives for up to 5 days at a time, easily covering 1,000 miles in a trip. Kenny also hosts the Beyond the Wheel Podcast, which we featured in a previous post. With Battle Born Batteries in their RV and their dog Belle by their side, their home on wheels can go wherever they need to be. 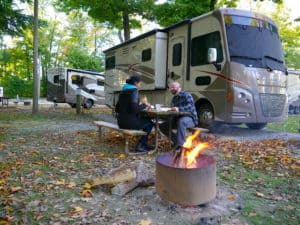 It’s a wonder Kenny and Sabrina wanted to live full-time in their RV after their first experience camping in an RV.

They got interested in RVs by watching YouTube, and in October of 2016, the couple rented an RV to go camping with a friend. The couple had never been camping before, and he said they didn’t even know how to make a s’more. However, they kept running into problem after problem.

“The rental was horrible, but the experience was amazing,” Kenny laughed.

The level jack and exhaust fan didn’t work, there was mold in the fridge and a bit of blood in the bathroom sink. Despite the frustration, Kenny said the whole weekend felt like one big adventure. But every problem they fixed with their RV felt like a major victory. They also enjoyed how friendly fellow campers were, as they would come out to introduce themselves and help out the first-time campers.

“For me, it was that we laughed so much,” Sabrina said. “Everything that went wrong just made it feel like a sitcom. It was just hilarious.”

That experience was fresh in their mind when the couple was looking to make a lifestyle change. Sabrina is an Osteopathic Physician specializing in Pulmonary Critical Care, so she spends her time helping patients with lung problems and caring for those in the ICU. But working about 80 hours a week, Sabrina was feeling burnt out, and the couple wasn’t seeing each other as much as they wanted to.

To take greater control of her schedule, Sabrina took on locum work where she is an independent contractor at different hospitals to fill in for other staff. After about 6 months, she was enjoying the change. She could go somewhere and concentrate on working with patients and spent less time “having meetings about meetings.” However, with the amount of traveling she was doing, Kenny and Sabrina missed each other.

They were already looking for ways to downsize their lives and live with less stuff. Inspired by YouTubers living in RVs full-time, they felt like that lifestyle could work for them.

“No crazier than us, anyway,” Kenny added.

They found the RV lifestyle fit them perfectly. Sabrina would book her assignments, and Kenny would drive them to their destination. At first, they were on edge sleeping in the parking lots of gas stations and casinos. Almost every noise would worry them.

“We sleep like babies now,” Kenny said. “In about 4 years, nothing has happened where we felt like we were in any type of danger.”

He said they would sometimes leave a parking lot or gas station if it didn’t feel right, but the experience has been a lot safer than they imagined, and people are much friendlier than they initially thought. Now Kenny and Sabrina leave their chairs and grills outside their RV, just like all the other campers. Growing up in Philadelphia, that was something that Kenny had to get used to.

Sabrina said living full-time in an RV and traveling has made her life better. Since they bring their home with them, she doesn’t have to worry about forgetting medical equipment, and she travels with all the medical books she needs. She says her temporary co-workers can’t even tell she is living on the road unless she tells them. And when she gets home, she still gets to enjoy the company of her husband and Belle. She said it adds a lot of normalcy to her nomadic work life. She said living in an RV full-time doesn’t feel too different from when they lived in an apartment since they still eat the same food they cooked for themselves while stationary. They still stream Netflix at night and can now enjoy spending more time together.

‘Our Windshield is a movie screen’

One thing that surprised Kenny was how much he enjoys driving the RV. Kenny thought he would enjoy exploring their destinations the most, but he loves getting behind the wheel of their Winnebago Vista LX and driving.

“Sabrina always says I have this stupid smirk on my face every time I’m driving, I just really enjoy it,” Kenny said. “I always tell people our windshield is a movie screen and America is playing on it.”

The couple can cover a lot of miles. In the last 6 months, Kenny said they have covered about 15,000 miles and normally move every 7 days. Sabrina said she is surprised they don’t get to sightsee as much as she thought. She expected they could passively explore the country while living in their RV. They still get to have adventures, but they have to work them into their schedule actively. Most of the time, when Sabrina is working, they are staying still, and when they are on the move, they are driving straight to Sabrina’s next job.

Kenny said he expected our lithium Battle Born Batteries would be most useful for dry camping. And yes, our batteries did help them stay out in the Nevada desert for about 6 days. But Kenny said the batteries really shine when they are booking it across the country. They can drive as much as possible and then crash in a Walmart parking lot or at a Flying J, and can still power their laptops, watch TV and live their life similar to if they were plugged into shore power. So, they can concentrate on getting to Sabrina’s next job rather than recharging their batteries.

Sabrina said she isn’t good at monitoring their power supply, and now Kenny doesn’t have to be upset at her if she forgets to turn off their inverter to power her laptop. Kenny said he stresses enough about the batteries for the both of them, and now he can let go of his battery anxiety. Kenny likes how Battle Born Batteries take a lot less maintenance than their old lead-acid batteries. He doesn’t have to get under their RV and refill the batteries with water every month. Kenny said he also likes to avoid running a generator because they are noisy and can take a lot of maintenance.

The couple decided to put lithium batteries in their vehicle after their lead-acid batteries died in the middle of the night in 20-degree weather while running their furnace all night. Now with two Battle Born batteries, they can run their furnace fan all night and still have 80 percent capacity in the morning.

“You put the Battle Born Batteries in, and you kind of forget they’re even in there anymore, because they just work and you don’t have to think about them anymore,” Kenny said.

Equipped with their Battle Born Batteries, they are ready to hit the road and “just live” without worrying about power.

If you’re curious about other aspects of living in an RV full time, make sure you subscribe to their channel, Moving Forward Adventures, and listen to Kenny’s Podcast, Beyond the Wheel. Kenny and Sabrina love to do live Q&As with their audience and are happy to answer questions about living on the road.