No stranger to a nomadic lifestyle, Ben Jamin of Kombi Life has been on the road since 2008. He currently drives his 1973 VW Bus, nicknamed “Boomerang” to its limits, having just completed an extensive tour of Europe. With Battle Born Batteries powering Boomerang, Ben and his travel partner Leah have been showcasing their exciting travels on their Kombi Life YouTube channel and how they get out there and stay out there during good times and bad.

Ben has always had a love of tiny living and travel. Originally from the Jersey Channel Islands off the coast of France, Ben spent five years driving a VW Kombi from Chile to Alaska. The trip took him along the Pan-American Highway where he overcame several hurdles, including 12 different engine rebuilds and fires. His favorite memories along the road are just being able to deeply immerse himself into the culture of wherever his travels take him. He’s also worked as a tiger trainer, lived with a tribe in Borneo and hitchhiked across Cambodia.

Leah hails from Australia and has a background in social work. She  met Ben in a small coastal town in Mexico and has been traveling since 2007.

Her favorite part of this lifestyle is being able to film every day in a different location. Together they adopted their adorable pup Alaska, who was born on the streets of Peru and has traveled alongside them for many years. 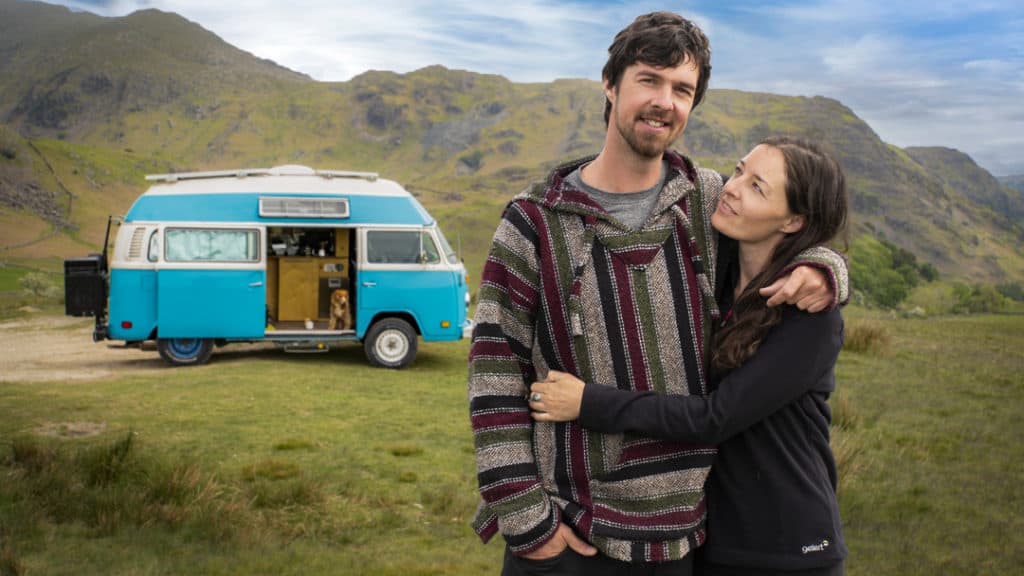 When it comes to their rig, Kombi Life loves how the van can drive long distances at a fraction of the cost and is great for off-roading. However, Ben admits there’s disadvantages such as difficulty maintaining the older parts and a lack of availability if they break.

Ben and Leah are also passionate about helping others while on the road and live their life by the motto “leave the world better than you found it.” They make sure to help people that they meet along their journey instead of donating to large charities. The direct impact of changing someone’s life, in big or small ways, means a lot to the couple and their viewers.

Ben admits that it might seem like an overwhelming task to try and change the world, but charitable acts and donations come in all shapes and sizes. When it comes to advice for starting a project for the greater good, Ben states that “just doing it” and making the initiative to do so is a great start. The couple even decided to give away their first rig from their first expedition from Chile to Alaska to a Kombi Life YouTube subscriber in need.

Over time, Kombi Life aimed to save up enough funds to donate to worthy causes and people that they meet while on the road. Whether it’s buying a meal for a family in need, or donating to a worthy charity, Ben and Leah strive to help make a difference.

“Our projects reach millions of people and we want it to have a positive impact on the viewers,” said Ben. “In turn, it’ll help encourage others to pay forward what they can to make a better place even if it’s just one kind act at a time. It’s so easy to just spread more positivity than negativity.”

Traveling and Overlanding the World as Kombi Life

Kombi Life’s previous trip was the “Hasta Alaska Overland Expedition” where they spent time overlanding in South America. It was inspiring and scary at the same time, admits Ben, but he managed to achieve his dream in 5 years. He advises other people interested in jumping on the #VanLife trend to do their research and know what they really are getting into.

“With the work from home lifestyle really taking off, people are looking more and more into the option of taking their home office on the road and into the forest,” he said. “With the pandemic, people are also able to travel safely in this way and just really travel further to get more bang for their buck.”

Ben and Leah recently had to prematurely finish up their travels in Europe due to the spike in COVID cases that the continent is experiencing. They were able to travel to places in Italy, the Czech Republic and Morocco with less tourists but more restrictions.

Check out a recent video where they explored an almost empty part of Italy and took part in activities such as paddle boarding through the famous canals and visiting geothermal hot springs.

There’s a lot of places they’d love to explore more in-depth, such as towns like Florence, and they are extremely hopeful that 2021 will bring them the opportunity to do so.

Kombi Life also has 370 watts of solar power on their roof. You can watch their in-depth system setup video here, which features several appearances from our CEO Denis!

“Our trip turned into a lifestyle, and sometimes it wasn’t possible for us to work on the road with our previous system,” Ben said. “Battle Born Batteries give us the opportunity to be more productive and push out more content.”

Ben also has a background and interest in electrical systems, offering an online guide and resources to understanding, designing and assembling a system that will best meet the needs of off-grid enthusiasts and their lifestyle.

What’s Next for Kombi Life? What’s at the top of Ben’s travel bucket list? He wants to push east into Asia or take the chilly drive up to the Arctic, although “not during the dead of winter,” he jokes.

They also have been busy after the third edition of their travel guide “Vehicle Dwelling: An Expert’s Guide to Nomadic Living” was published several months ago. The digital book helps highlight how to live off-grid along with tips and tricks to make your rig feel like home. As more and more nomads hit the road, Ben makes sure that he can keep the guide as accurate as possible.