Here at Battle Born Batteries, our team enjoys learning more about the customers we assist. Riley Warddrip is a Winnebago RV enthusiast who was thrilled to discover that our recently released BBGC3 Gamechanger battery, with its unique form factor that can be mounted anywhere, fits perfectly in the factory standard wet-cell battery box. Our team is glad he shared the news first with us! Riley graduated from the University of Nebraska and started a job immediately as a sales rep for Xerox. During his 30 years there, he worked his way up to become a Vice President of the division. Riley also has multiple patents under his belt because he enjoyed working with the company’s engineers and their openness to implementing new marketing features into Xerox’s hardware. Overall, he loved the passion that the engineering department brought, and in turn, they helped to foster his interest in technology.

As a retiree, Riley enjoyed spending time at his local Apple store learning the ins and outs of the technology and eventually taught customer classes there for three years. He also enjoys driving his Vanderhall, a three-wheeled Venice roadster. With a turbo Chevy engine and transmission, he describes it as a “mini-Indy car!”

He tows the Vanderhall with the second Winnebago RV he’s owned, a 2020 Navion. Now that the RV comes standard with a DC compressor fridge, Riley noticed that the 12-volt wet cell battery system that comes standard wasn’t providing enough AMP Hours and often was straining to keep up with his needs especially when boondocking (without 110 hookups) on trips. The new refrigerator only runs on DC power and Riley was pulling in 28 amp hours on the lowest setting. Combined with his CPAP machine (also a heavy draw) running overnight, they were testing the limits of his system. Those wet cell batteries just weren’t passing that test.

Riley knew something had to change because powering those essentials continued to be an unnecessary struggle. Even with a fully charged wet cell system, the power would drain fairly quickly and he would have to eventually rely on his backup generator system. Too many times Riley woke up too early needing to run his generator! Taking his time to research the best batteries for upgrading the Navion, Riley said that most of the new Winnebago RVs are still running on outdated lead-acid technology. 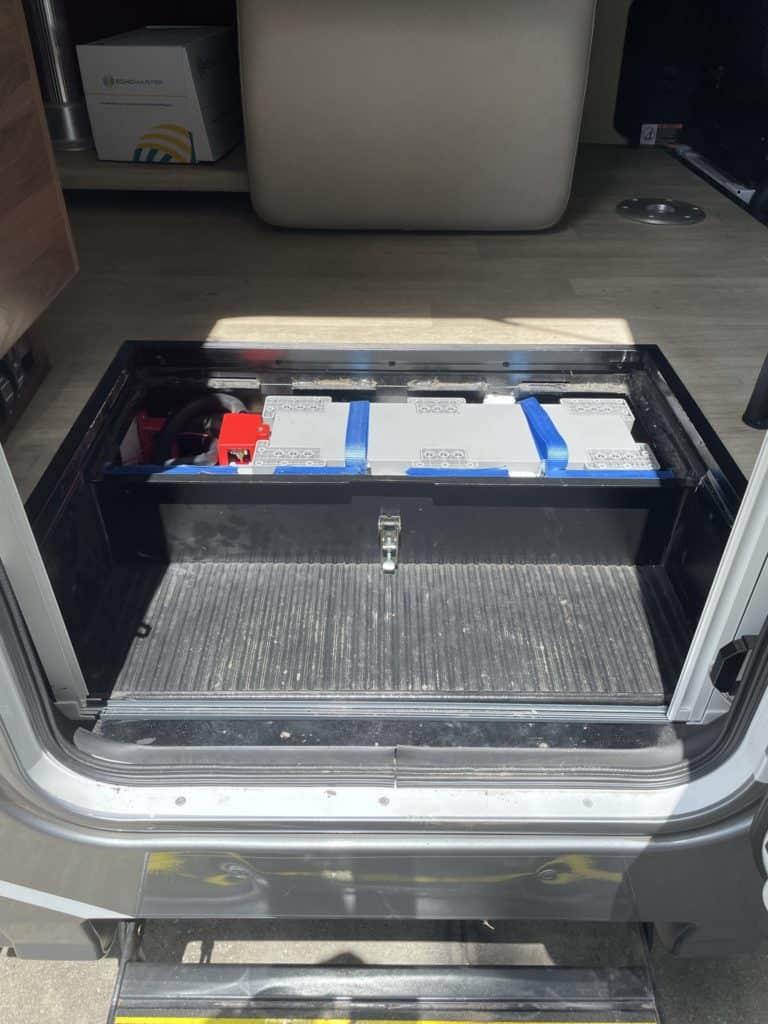 During his research, Riley relied on a very knowledgeable friend for battery suggestions. While Riley’s friend may utilize Tesla lithium batteries in his RV, he recommended our company thanks to the service from the technical sales team.

Riley was glad to have so much tech support behind him and said while he considers himself to be “unknowledgeable in the field of power systems,” he’s increased his knowledge and confidence thanks to one of our specialists, Brandon.

He was also surprised to learn that our BBGC3 battery was not only a perfect fit for the Navion’s standard battery box located in the stairwell, it provided the most AMP Hours (270). The battery is also able to be mounted anywhere in your system, thanks to its unique form factor.

Utilizing just the single BBGC3 battery and upgraded solar on the roof, the Navion can stay at 100%  in the Florida sunshine, even when the fridge is running at the coldest setting possible. Other components like the BMV-712 help Riley monitor how his system performs, even from his phone. Without any battery anxiety, Riley now can go on trips and avoid running the generator early in the morning to the chagrin of fellow campers. Now he’s ready to get out there and stay out there, thanks to our LiFePO4 technology on board!

You can catch Riley at Winnebago & Vanderhall rallies or when he’s on the road. He’s ready to travel to different stops across the country preferring to boondock at the Harvest Host locations.

Do you have a compelling customer story that you’d like to share? Our marketing team would love to hear it! Send an email to [email protected] to connect.