With Battle Born Batteries, traversing the seven seas and the adventures in between has never been easier for Matt and Kristen of Sailing Good, Bad and Ugly. Their YouTube channel showcases the ups and downs of building your own boat and doing repairs. They previously used only one lead-acid battery, but now that they’ve made the switch to lithium batteries, they can travel further and let life go!

Matt and Kristen have been actively sailing for the past three years. After hanging up the gloves from a successful career in martial arts, Matt bought his first boat 10 years ago after passing a marina and thinking the lifestyle aspect of it was “cool”. Both hail from Florida and Matt also has a background in installing pools.  He’s super comfortable working with steel, concrete, carpentry, and plumbing, also credits time spent making surfboards as a pivotal part of his experience with fiberglass. As for Kristen, being able to film everything and create the content around the construction process of it all is important to her. 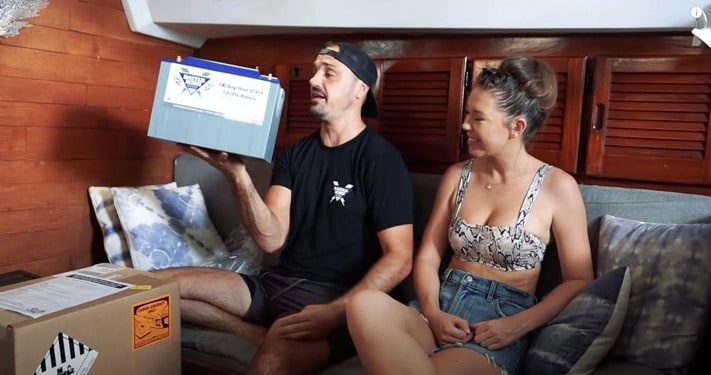 The couple did a lot of remote work before it increased in popularity and spent plenty of time in Miami and the Key West working on the beaches as bartenders. They also patiently waited for their YouTube channel to take off, and now it’s wildly successful! Matt and Kristen now feel like they’re living the cushy life since their upgrade to a LiFePO4 system. They said it was a nightmare to accommodate simple necessities like a fridge or laptop charging with their old system and relied heavily on the generator for usage.

Before switching to lithium, Matt and Kristen always had to make the tough choice of what appliances they wanted to run because they simply did not have enough power to run everything.

“I’m used to not having air conditioning, as someone who grew up blue-collar it’s not too much of a culture shock,” said Matt.

With the inability to run even the most basic of their power system at once and they were often unable to power their running lights at night, which lead to a lot of stress and battery anxiety. With their new Battle Born Batteries system, they are looking forward to getting some peace of mind and are constantly learning a lot about their system and its capabilities as time goes on.

The process for restoring the boat was a longer one than they planned, with the painting project alone taking about 6 weeks. They were motivated to do it quickly as every additional day in the marina adds up. After a grueling 47 days and finally tackling the paint and primer process, Matt and Kristen hit the seas on a long overdue voyage.

Before they upgraded the system, they experienced some hard times. The two admit that they bought the boat for $5,000, used a discarded sail and a grommet kit from Home Depot. Matt jokes that the setups were “super gangster,” such as the inboard motor was pushed with the outboard rudder to start it up. Thanks to our Battle Born batteries, Matt and Kristen can sail to wherever they want— or specifically, as Matt jokes, where Kristen wants to go.

“Every night there’s a beautiful sunset, and as I have a beer on the beach, it’s totally worth it,” said Matt.

Sailing with LiFePO4 Batteries Onboard:

Having basic appliances like a fridge is a game-changer for them, and they’re glad to have one onboard instead of a generator and cooler. Having an electric espresso maker is a possible splurge that they’re looking to get as well.

The crew certainly doesn’t miss having to eat hot beans and rice while drinking hot beer! Sailing via hand-steering is rare due to its difficulty and many modern boats have autopilot. It also can be dangerous at times due to steering and having to stay up for 24 hours, but they’ve made it work.

As it’s hurricane season, the couple is planning to stay put, wait out the COVID travel regulations, and then head south to areas like Panama and Grenada. Overall, their goal is to sail until they go everywhere, see everything and push their boat to its limits. Now they can, thanks to the green power of lithium!

If you’re ready to dive into the sailing lifestyle, Matt recommends setting a plan, a date, and getting reasonable goals on the horizon are important first steps. “Don’t let people talk you down, and don’t do any grandiose goals,” said Matt. “If you start off with 200 miles and make it, then go to 300.”

Kristen agrees, adding that “You shouldn’t wait to start, and have a lot of plan A’s, B’s and C’s because having backup and being prepared is important.”