Paige Claassen is a professional rock climber from Colorado who travels the world competing in climbing competitions and seeking out routes that challenge her skills. While on the road, she lives out of a van that was custom-built by her husband, Arjan de Kock. Together, Paige, Arjan, and their puppy Freya take their home comforts on the road in their van powered by Battle Born Batteries.

Paige Claassen moved to Estes Park, Colorado as a shy, nine-year-old kid. Her parents were searching for an outlet for her and were trying to get her involved in activities with other kids her age. After trying basketball, swimming, and even playing the saxophone, Paige was having a hard time finding a place to fit in.

After visiting the local climbing gym with her parents, Paige fell in love with the sport of rock climbing. It wasn’t long after that Paige was competing in climbing competitions at national and international levels. Now, over 20 years later, Paige is still competing in the sport she started as a kid and loves it more than she ever did before.

While climbing in South Africa, Paige met Arjan de Kock who she later married in May of 2016. Paige and Arjan spent the first few years of their marriage, traveling the world for Paige’s climbing career but eventually settled down in Paige’s hometown of Estes Park, CO. When Arjan is not building custom vans, the couple is traveling to new places for climbing and outdoor adventures.

In addition to climbing, Paige loves to cook, hike with her puppy, Freya, and thrift shop. Paige is also passionate about helping others and founded the Southern Africa Education Fund in 2016. The goal of the foundation is to build new classrooms in rural areas and ensure that no child is limited by their circumstances. “Kids deserve the right to create their own futures. By cultivating a child’s skills, motivation, and confidence through a structured learning experience, we can educate and empower the children of Southern Africa.”

The Life of a Professional Climber

Although Paige has many interests, climbing still reigns at the top of the list of things she loves to do. She tends to refer to her climbing career as a “fake job” where she simply gets to “play”. Paige’s climbing routine involves her researching a route she wants to tackle, posing the idea to the brands she works with, and then going out and doing it. She loves being able to set her own objectives and choose routes and places that inspire her. Despite never planning to be a full-time professional rock climber, Paige loves the lifestyle her career allows her to live.

For Paige, climbing gives her a sense of peace and calmness she doesn’t experience doing anything else. Her mind is constantly racing and worrying about what she’s doing next, but when she’s up on the wall, her mind goes blank. Surprisingly, Paige isn’t even thinking about her route or next steps, she simply just climbs.

Paige describes her climbing style as choosing a difficult route just outside of her physical and mental abilities and then attacking that route again and again until she can do it without falling. In the fall of 2021, Paige spent a month in Squamish, British Columbia attacking a hard sport climb known as the Dreamcatcher route. She climbed the route every day until she could finish it. 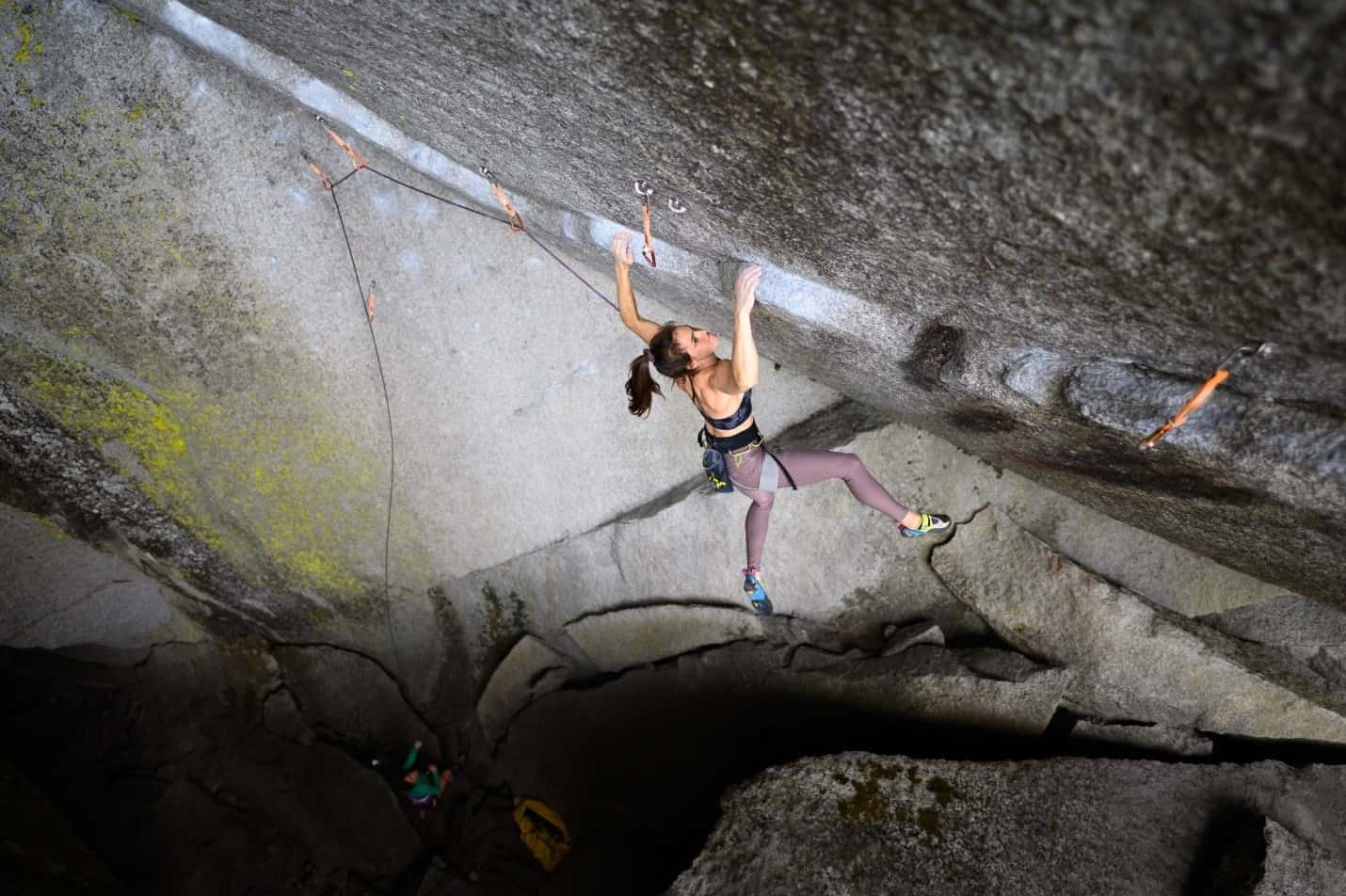 Currently, Paige’s favorite route she’s climbed is Dreamcatcher, but she says her dad jokes that her favorite route is always the one she’s most recently climbed, so that may change after her next climbing adventure. Even so, the trip to Squamish will be one Paige always remembers. “Squamish is a really special place to climb because it has so many types of climbing–big walls, bouldering, sport climbing–and it’s all world class in a beautiful setting.”

What Paige cherishes even more than tackling a challenging route are the experiences surrounding it. After completing the Dreamcatcher route, Paige and Arjan drove to a lake and hiked around in search of a rope swing. In the pouring rain, they found the rope swing and spent the rest of the afternoon jumping into the lake and laughing together. That moment stands out to her more than the climbing did. Climbing with the Comforts of Home

One of the bests parts about Paige’s climbing experiences is getting to live out of the van that Arjan built for the two of them. It’s a custom build that Arjan did to perfectly fit their needs while traveling and climbing. Paige loves the flexibility to go anywhere and move locations at the last minute, without being tied to an Airbnb. They’re able to have the comforts of home and all the gear options Paige could possibly need.

Living out of the van while climbing gives Paige and Arjan direct access to their climbing areas. The routes that Paige climbs tend to be away from towns and cities, so instead of commuting everyday, they’re able to camp out directly underneath the route. “The van just makes traveling really easy, everything I need is within arm’s reach.” 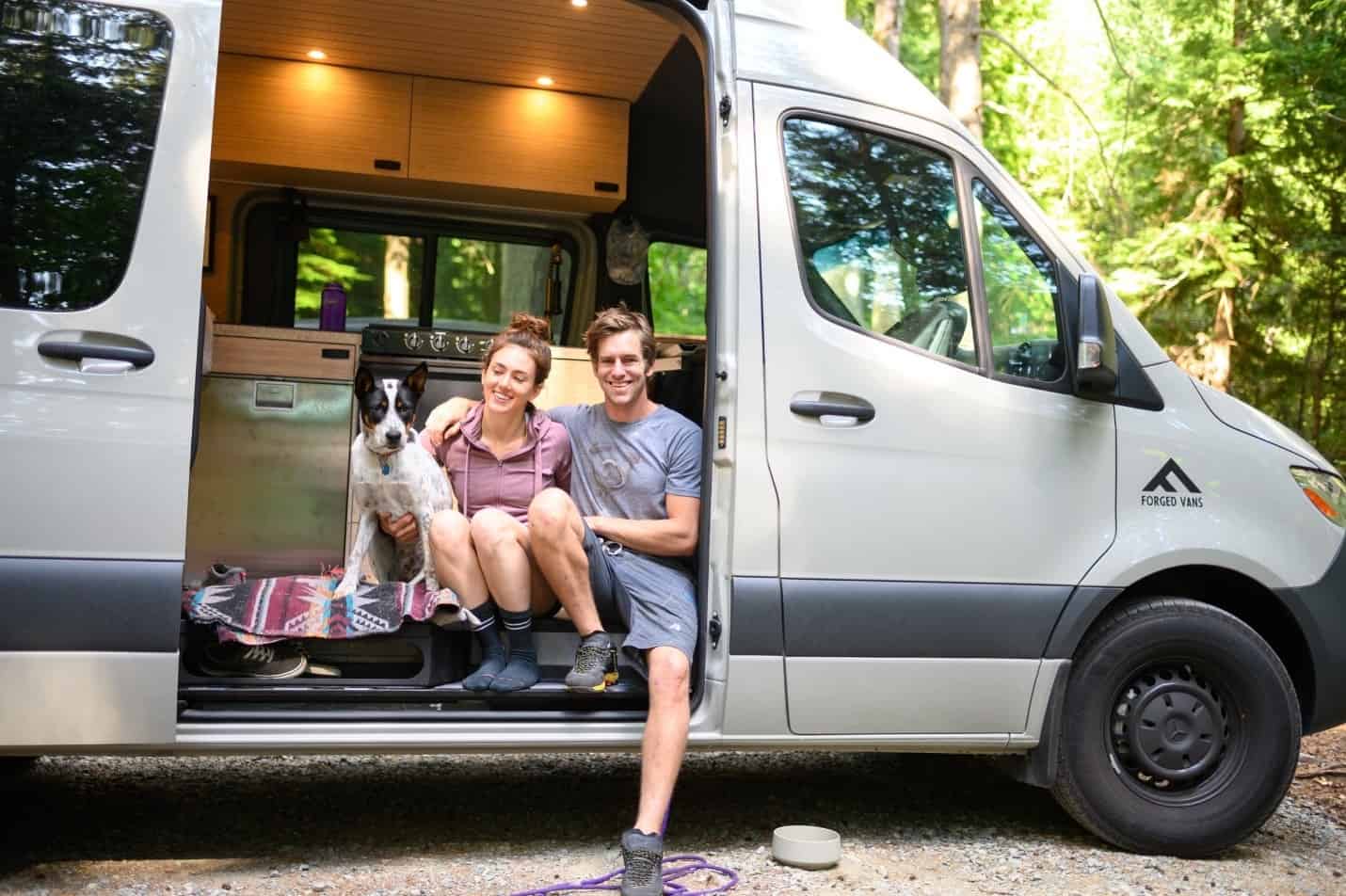 In ideal climbing conditions, it’s very cold, and Paige and Arjan spend the day shivering and not being able to feel their hands or toes. It’s essential for Paige to take care of her body and recover well when she is climbing at her limit. “To hop in the van after a long day of climbing, crank on the heat, plug in my heating pad to soothe my sore muscles, and turn on the electric massager to work out the stiffness in my back, it’s so comforting.”

A key part in their van build was having an electrical system that could power all their essential electronics. Arjan chose the following Battle Born Battery components to power their van:

Paige and Arjan’s 1 year old puppy, Freya, also gets to enjoy the benefits of the Battle Born system. With her bed right next to the heater, she’s always cozy. Freya loves the freedom of van life and getting to spend her days living outside, hiking, and playing with other dogs.

What’s Next for Paige?

Paige and Arjan are currently on a climbing trip in Las Vegas, camping out in the desert and enjoying time with one another and their friends. Upcoming climbing trips are going to look a little bit different as Paige is currently 6 months pregnant, and her and Arjan are expecting the arrival of their daughter in June.

They can’t wait for adventures with their baby and they’re hoping to ease back into van trips over the summer. Eventually, they would love to go back to Squamish, British Columbia and also climb a favorite route at Smith Rock in Oregon. “We have a lot of unknowns over the next year, so we’re going to be trying to go with the flow, which the van is perfect for!”