Anne and Brian Klumpp, of On the Road of Adventure, have spent the last three years traveling across the US in an RV. Accompanied by their adorable puppy Skipper, the Klumpp’s enjoy experiencing new cultures through their tastebuds. They love visiting National Parks, enjoying local restaurants, wineries, and breweries, and cooking extravagant meals in their RV.

Meet On the Road of Adventure

Anne and Brian Klumpp were both born and raised in Michigan and have been together for 12 years. And you can’t forget about their 3-year-old puppy named Skipper. Although the Klumpp’s have always had big travel dreams, they had only ever lived in one state. They owned a home in Beverly Hills, Michigan, along with a 35-foot sailboat they referred to as their “floating summer cottage”.

Brian was working in IT security and Anne had a 25-year career in the wine industry. While they both loved their careers and their lives in Michigan, they yearned for something more. Early on in their time together, they started making plans to live a life of full-time travel.

From Dreams of Sailing to Living on the Road

Brian had always had a dream of living on a sailboat full-time, and he and Anne created a 5-year plan that would lead them to move onto their sailboat. Three years ago, when they added Skipper to the family, they named him to be a part of their sailing crew.

Despite their plans and dreams, Anne couldn’t imagine living on a boat full-time, and towards the end of their first sailing season with Skipper, they began to look at RVs. Anne and Brian recognized that in addition to their own needs on land, Skipper also needed to get off the boat for walks and for time to simply be a dog. An RV ended up being the perfect compromise as it provided a better life for Skipper and satisfied both Anne and Brian’s desire to travel more.

Life in an RV wasn’t something Anne had initially planned for herself either. When Brian and Anne first met, Anne had to admit to Brian that she didn’t camp. She even joked that her “idea of camping was to stay at the Holiday Inn instead of the Ritz Carlton.” Although Anne was initially hesitant, the Klumpp’s ended up taking the plunge into living full-time in their RV. Anne even said that she “may be “camping”, but honestly, it’s more like the Ritz Carlton version of camping than the kind of camping that Brian liked to do back then.⁠” 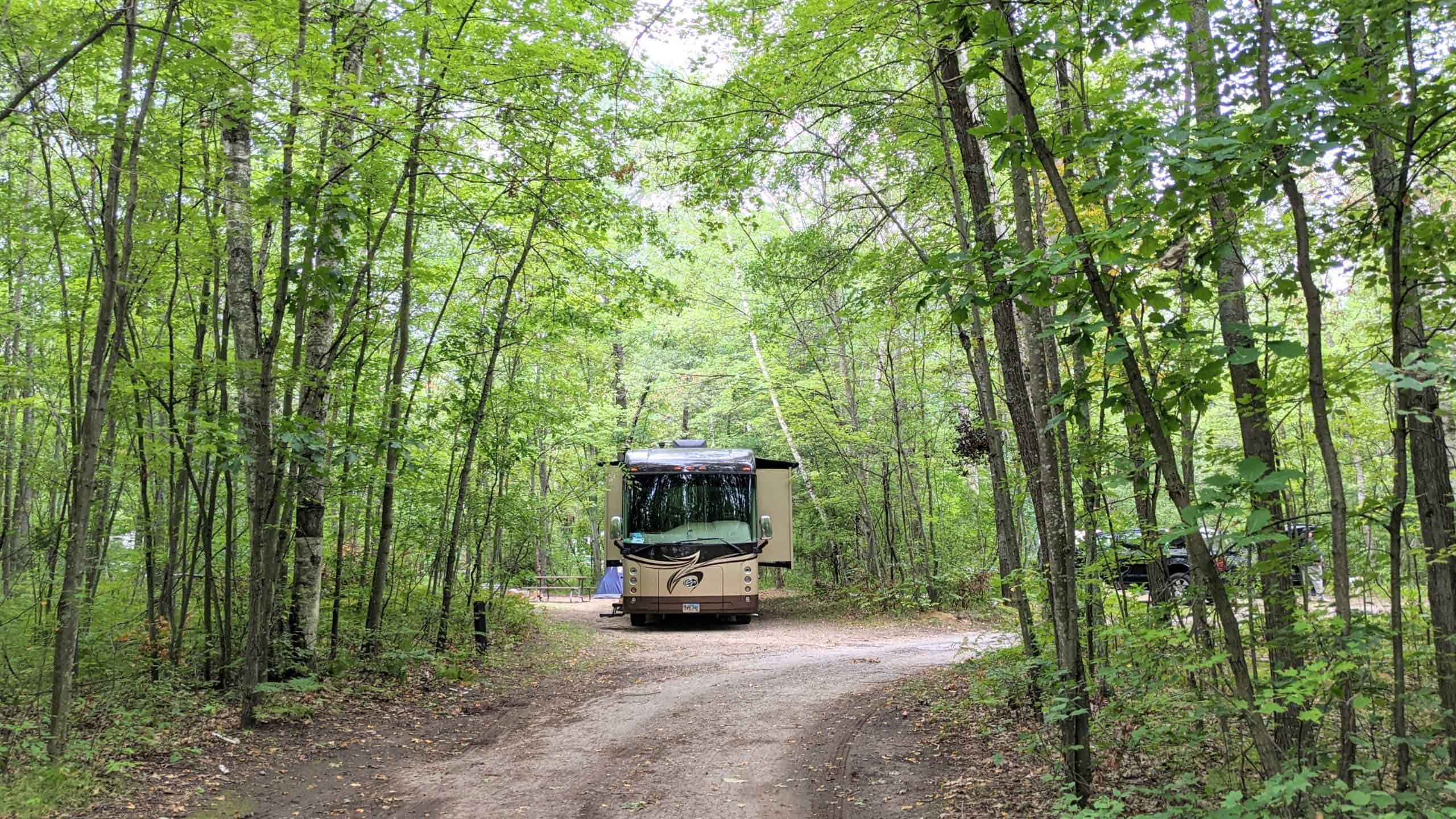 Full-Time Travel in an RV

In April of 2019, Brian and Anne sold their home and their sailboat and purchased a 2015 Entegra Aspire Motorhome. After being heavily involved in the boating world, they took naming ceremonies and the superstitions behind them very seriously. They made sure to take the naming of their “land yacht” just as seriously. They named her Daisy the Diesel Pusher and call her Daisy for short. Daisy pulls their Ford F-150 named Duke.

As full-time RV travelers, Brian kept his full-time job in IT security and works remote from their dinette table. Anne left her career and now refers to herself as the Estate Manager as she plans their travels, cooks, meal preps, cleans, runs their website and social media channels, and schedules any necessary appointments herself, Brian, and Skipper need.

For Brian and Anne, the best part of their RV lifestyle is getting to immerse themselves in the culture of the places they visit, then getting to sleep in their own bed at night and having all the comforts of home. In addition, Anne told us that she loves how close she has gotten with her husband as they have spent so much time together.

The Klumpp’s love that they have been able to meet so many new people whether they’re neighbors at a campground, attending an Xscaper convergence together, or just staying connected through social media. “It’s great fun meeting new people and even more fun reconnecting with the friends we’ve met in new cities when your travels have you crossing paths.” While it’s difficult to pick a favorite travel moment, Brian and Anne said that traveling across the Rockies down I-70, heading into Utah, would top the list. The stunning views reminded her of how vast the world is and how small she is in comparison. Utah is their favorite state they have visited so far, and Bryce Canyon National Park was the highlight of that trip.

Cooking on the Road Powered by Battle Born Batteries

During their full-time travels, the Klumpp’s “love seeing our country’s beauty and discovering local culture through food and beverage in the places that we go.” They love going to restaurants, wineries, breweries, and farmers markets to experience a new culture. Anne has a passion for cooking that has only blossomed since the Klumpp’s began living in their RV.

While some recipes have needed tweaking due to a lack of equipment and space, Anne has noticed very few differences between cooking in an RV and cooking in a house. Planning out meals simply requires an awareness of the limitations of their space, their stove only has two burners, so one-pot meals are a go to, and the RV doesn’t have a dishwasher, so the less dirty dishes a meal creates, the better. This is especially important when boondocking since water conservation is essential and is much easier with fewer dishes to clean.

One thing that has made cooking while boondocking easier is their latest upgrade to their RV. Brian and Anne recently completed an install of Battle Born Batteries. Before their install, Brian and Anne were never comfortable boondocking and would only do it one night at a time once or twice a year. After only two months since implementing Battle Born into their system, they have boondocked for ten nights. “Our batteries last through the night and beyond! Not being startled awake by the generator or afraid of disturbing our neighbors makes the experience so much better!”

Life on the Road with Skipper Skipper, the Klumpp’s puppy, is an important part of the family. Brian and Anne often refer to him as their “fur baby.” A huge draw to the RV lifestyle was that Brian and Anne hated leaving Skipper for their weekend travels, so when the three of them began living in the RV full-time, Skipper was able to accompany Brain and Anne everywhere they went.

The Klumpp’s say that they’re sure Skipper loves being a full-time RV dog. Anne said that “He loves exploring as much as we do. He is happy to hike on a trail or walk around a campground where he gets to meet tons of people and other dogs.” Just like Brian and Anne, Skipper gets to enjoy the excitement of travel and going to new places, while still being able to return to the comforts of home.

What’s Up Next for On the Road of Adventure?

One of the Klumpp’s favorite parts of full-time travel is that they get to follow where the “nice weather goes.” Currently they are spending a few months in Tucson relaxing, enjoying the sunshine, and experiencing the vibrant restaurant scene.

Following their time in Arizona, Brian and Anne plan to set out on a trek east to Virginia for their nephew’s wedding. As they traverse across the country, they have several stops planned along the way to stop and experience new sights and cultures.