Professional bass angler, John Cox, has been competing in angling tournaments for nearly 25 years. He’s spent the last 12 as a full-time professional, first competing in Fishing League Worldwide (FLW)/Major League Fishing (MLF) and then joining the Bassmaster Elite series in 2019. He’s passionate about fishing and spends more days on the water than off. When John isn’t fishing, he loves spending time with his wife Melissa, their four kids, and their grandson.

Florida native, John Cox, has been a full-time, professional angler for the last 12 years. Throughout his career, he’s qualified for the Bassmaster Classic four times, has over 50 top ten finishes, and has five major wins at the professional level. Currently, he is competing in both the Bassmaster Elite and Major League Fishing (MLF) circuits.

Early on in his career, John earned the nickname “Tin Man” when he made the choice to run an aluminum boat over the more popular fiber glass alternative. Initially, this decision was motivated by his finances. He had found a used Crestliner aluminum boat for sale in a car lot and, at the time, this was the only boat that he could afford. John grew to love the boat and ended up winning his third Fishing League Worldwide (FLW) tour in it. Now, more than a decade later, he’s sponsored by Crestliner and couldn’t imagine fishing from any other boat.

Living in Debary, Florida, John considers St. Johns River, Harris Chain, and the Kissimmee Chain of Lakes his home waters. While he loves fishing in larger bodies of water, John decided to bring the sport closer to home with a fishing pond in his backyard. The pond is stocked with bass that he’s raised and hand-fed. It’s no wonder some of the bass are 10- and 11- pounds as they’ll eat just about anything including cake, pizza, Peeps, and bologna.

The pond has allowed John to share his love for fishing with his wife Melissa, their four children, and their grandson. Spending so much time on the road has encouraged John to cherish the time he’s able to spend with his kids. When they’re not fishing at home or out on a lake, they play softball, soccer, and Fortnite and go on road trips together. 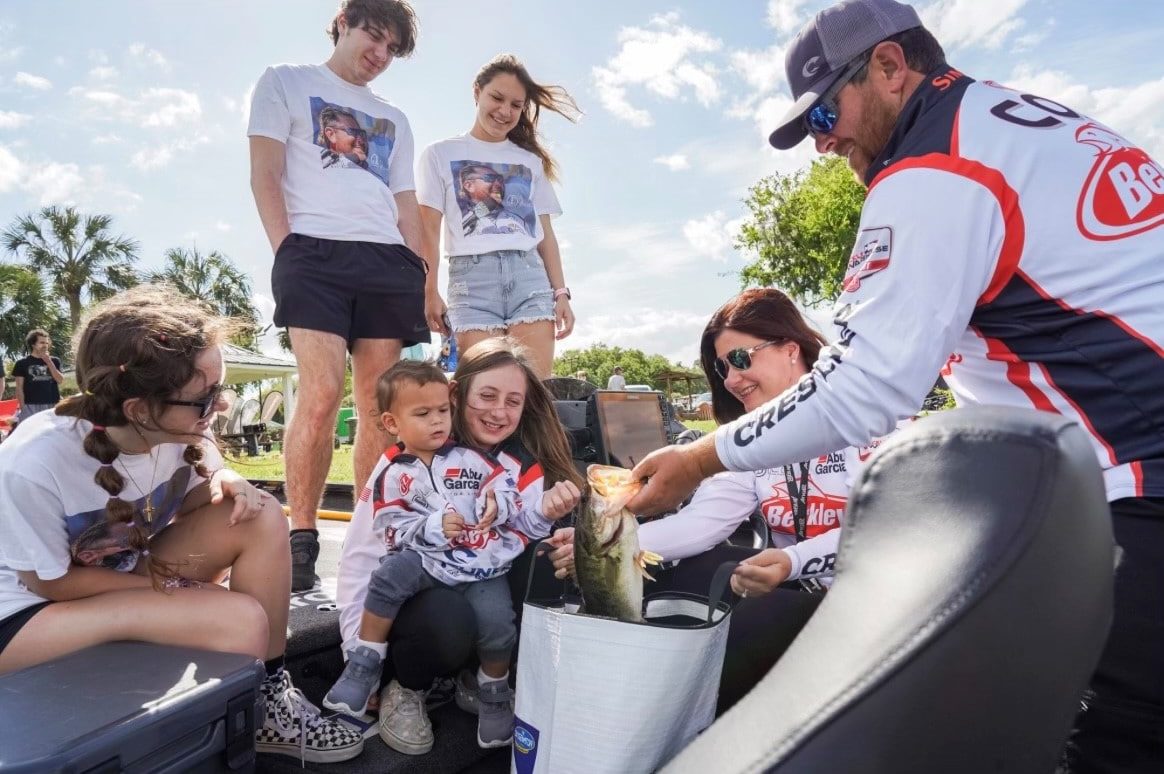 John’s journey to becoming a professional angler began when he was young. While he didn’t grow up in a traditional fishing family, his dad still signed him and his brother James up for the local Channel 2 News fishing contest. This contest consisted, simply, of catching a fish and submitting a picture for the chance to win a t-shirt. John and his brother ended up winning the contest, the t-shirts, and were featured on the news.

This small victory sparked a fire in John that steadily grew as he got older. A friend gave him a ton of hand-me-down fishing gear and he went fishing every chance he got, riding his bike anywhere within reach.  As a teenager, he met another aspiring angler who came from a similar background. Keith Carson lived just a few streets away from John, had a passion for fishing, and didn’t grow up in a traditional fishing family either.

When Keith and John began fishing together, they were learning from a friend named Joe Kramer. Kramer passed on his knowledge and skills to them, and they eventually chose to enter a local tournament as co-anglers. The two ended up winning that tournament and received a $50 payout, and just like that John and Keith were officially hooked on the sport and began pursuing careers as professional bass anglers. Today, nearly 25 years later, the pair competes against each other in the Tackle Warehouse Pro circuit but their brotherhood remains strong as they continue to support and cheer on one another.

In his 12 years as a professional co-angler, John has rarely slowed down. He is currently competing in both MLF and Bassmaster Elite tournaments. As his schedules overlap, he rarely has time for practice days and is known for jumping from tournament to tournament with a day or less in between. Often, John ends up driving through the night just make it to the start of another tournament the next day with no time to rest or recharge.

With his busy schedule, John needs to be certain his boat electronics have more than enough power to last multiple long tournament days without recharging. After growing tired of days being cut short by lead acid batteries, he made the switch to Battle Born LiFePO4 Batteries. John’s Crestliner is equipped with six 12V 100Ah Battle Borns wired in two 36V Series, and now he never worries about running out of power during a long day out on the water. Additionally, his Battle Borns only weigh 31 pounds each which allows John to have six batteries without worrying about weight issues.

Even after countless tournaments and competitions, John still goes through his pre-tournament rituals for a little extra peace of mind. While these rituals may seem to have no correlation to the day’s success, such as always getting gas at pump #1, no matter what, they’re an important part of starting each tournament day on the right foot.

A True Passion for the Sport

Despite spending half of his career competing in major tournaments against the best anglers in the world, John’s favorite memory is from his very first Jon-boat club tournament, long before he became a professional. “I remember getting that first bite, setting the hook, and getting him in the boat shaking in excitement. The crazy thing is 24 years later I get that same feeling when I catch a big one in the tournaments.” And 24 years later, John’s passion for the sport of angling still shines through his positive demeanor and constant smile, even on the most difficult tournament days.

As John simply puts it, he just loves to fish. From the ever-changing playing field that becomes a puzzle to piece together to the relationships made with fellow anglers and the ability to spend every day working outside, it’s easy to see that John is doing what he loves. He worked a lot of different jobs in order to pay to put gas in the boat, get to tournaments, and to finally be able to make angling his full-time career. Even now as a professional, bass angling is far more than a paycheck or a career for John but is something he is truly passionate about.

There are numerous lakes, bodies of water, and regions that John likes to fish, but his favorite is upstate New York. The unbeatable landscapes and ease of catching fish are what draws him and his family there time and time again. Although John loves many of the areas he’s already been able to fish, he can’t wait to expand his horizons and fish new bodies of water. Currently, California tops the list of places he hopes to fish one day.

What’s up Next for John Cox?

With a phenomenal start to the season, John is well on his way to achieving his goals of receiving a check at every tournament and winning Angler of the Year for both the Bassmaster Elite and MLF Pro Circuit. We can’t wait to watch John fish the rest of the season and cheer him on every step of the way.

Looking at long-term goals, we asked John what his dream catch would be. “My dream catch? That’s an easy one: my wife! But besides my wife, probably a 15-pound bass.” While John already got a hold of his true dream catch, we would love to see him reel in a 15-pounder one day!