Our customers are nothing short of inspiring, and we always enjoy sharing their stories. At Battle Born Batteries, getting out there and staying out there is something we believe in. If you’d like to be featured on our social media or blogs, email our team at [email protected] and we’d be more than happy to chat.

About Ed and Kyle’s Van Build:

Ed Carter and his partner Kyle are in the process of their second van build in the past year. Located in Bend, Oregon, the trail runners and adventurers enjoy big projects like this during the time of quarantine. That’s when their brand “How We Adventure” was born.

“We just want to see the world, travel as frequently as possible, and plan our adventures around beautiful places to run, ski, bike, drink coffee, drive aimlessly, drink beer, and eat,” said Ed.

They describe their bled of travel as something that isn’t relaxing, high and low in terms of cost, and planning for it is almost as fun as the adventures themselves. The couple’s blog is a great resource for anyone looking to drive through the most iconic stops on the California coast or getting into the lesser explored regions of Oregon. 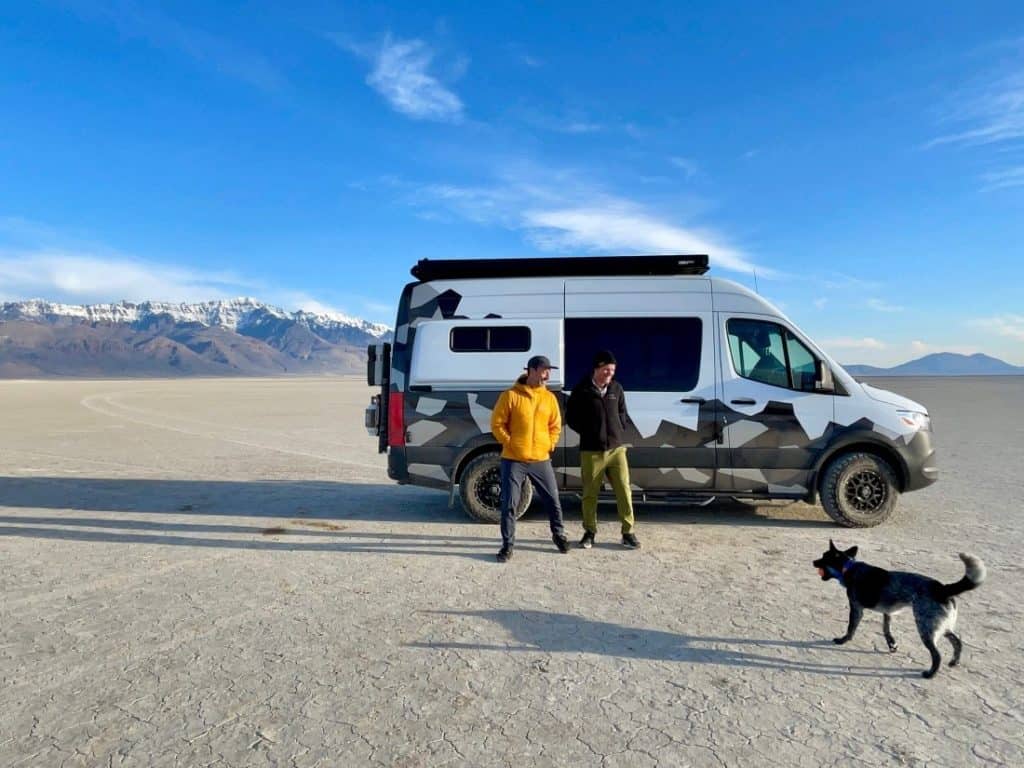 Their van is a 2019 Mercedes Sprinter which they purchased while stumbling upon the sphere of van life during the time of quarantine. Nicknamed “Kogai,” they describe its van aesthetic as a combination of Japanese and Scandinavian design aesthetics.

“2020 gave us all an unexpected time, so we took the time to reflect on our way of living, our values and what we stand for,” Ed said.

As a designer working with large brands such as Nike and Williams Sonoma, Ed did plenty of research and became grounded in what they were looking for in a van and the components to power it. He said that Kyle was the one to make the builds come to life, as “he’s more of the engineering-minded person!”

“It was definitely a shift because of COVID and I also needed a creative outlet as I wasn’t working at the time,” said Ed.

They bought the van and were able to quickly turn it around in a 10-week process. The couple, along with their new pup Koda, covered 16,000 miles over the summer and fall. Highlights for them included exploring the Mojave National Preserve, Zion National Park and the Battle Born state of Nevada. “Our needs for a van were pretty simple: we wanted components that would allow us to do what we wanted to do, like driving around and not having it shut down,” said Kyle. They said it was great to build out their system as well, and ended up adding an additional battery to the original two BB10012 Battle Born Batteries that they purchased.

Ed and Kyle note that people ask them what it really takes to build a van, and they said that the design process needs flexibility incorporated into it. They notice a lot of people run into a brick wall and can’t focus on anything else in the design process, so encouraging people to be smart with their time and resources is essential.

“Now our garage looks more like an Amazon warehouse, because we made sure to plan ahead with everything, even our equipment list,” said Kyle. They also note that sometimes trips to Ace Hardware and Home Depot are in order.

“A DIY van project is helpful because we learned about our system inside and out, which is why we purchased three more batteries,” said Ed. “So far we’ve had zero issues with the batteries, but we learned during a snowstorm in Portland about its safety shutdown mode.”

(As a side note about our Battle Born Batteries, they protect themselves from charging in cold temperatures and won’t accept a charge once the internal cell temperature drops to 24°F. At this point they will continue to discharge even down to -4°F. At this temperature we recommend no longer pulling power to avoid damaging the batteries.)

The couple also liked how they were able to call into our sales and tech team and chat with them anytime they had a question, and they were able to solve their issues “without feeling like idiots for asking questions.” Our team is always available to answer the phones when you need them.

“As many people start to build vans, we also want people to know that there’s no such thing as too much power! It definitely leads to an overwhelming aspect of the build, but we were confident in what we had,” said Ed.

Looking for a system to power your own van? Check out our bundle setups on our online store here!

Currently the couple are deep in the process of their Ford Transit van build for a client who is a true four-season adventurer in need of room for her bikes and skis. This build is also powered by Battle Born Batteries, so stay tuned to see what Ed and Kyle are able to do next. They’ve also got trips aplenty planned for the summer and beyond, thanks to our LiFePO4 technology powering their adventures.