This is a comparison between one Battle Born LiFePO4 battery and two 6V GC2 batteries connected in series.

A common battery configuration in RVs and golf carts involves the use of multiple 6 V GC2-style batteries connected in series to form 12 V or 24 V systems. In this post, we examine the differences in discharge and charging profiles between a single Battle Born 12 V 100 Ah (BB10012) pack and two GC2 batteries connected in series (see photograph below). The BB10012 weighs 29 lbs and the two GC2s weigh a combined 150 lbs. 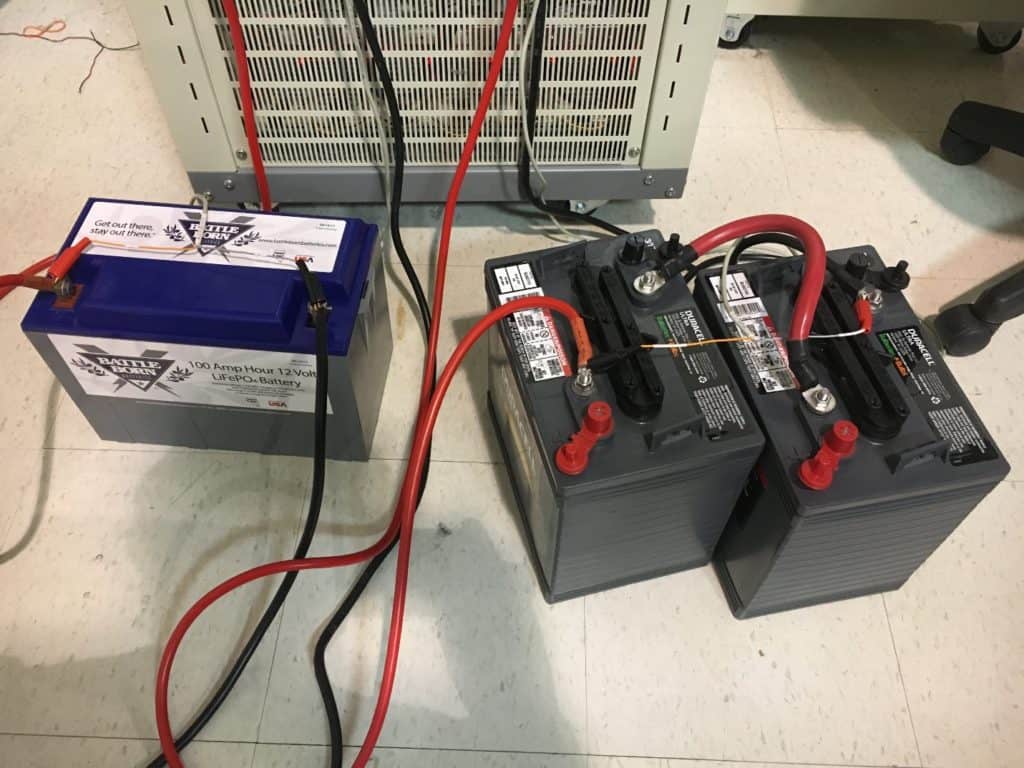 Two brand new Duracell Ultra high capacity 6 V batteries (Part number SLIGC115) were purchased from Batteries And Bulbs in Reno. These batteries have a capacity rating of 230 Ah. The batteries were fully charged by applying a 14.4 V charging voltage until the charging current fell below 1 Amp. After settling for 10 minutes, the batteries were discharged at a constant current until the battery voltages fell below 11.8 V. The discharge current among the tests varied between 10 A and 50 A.  The results of the tests for 3 discharge currents are shown below. 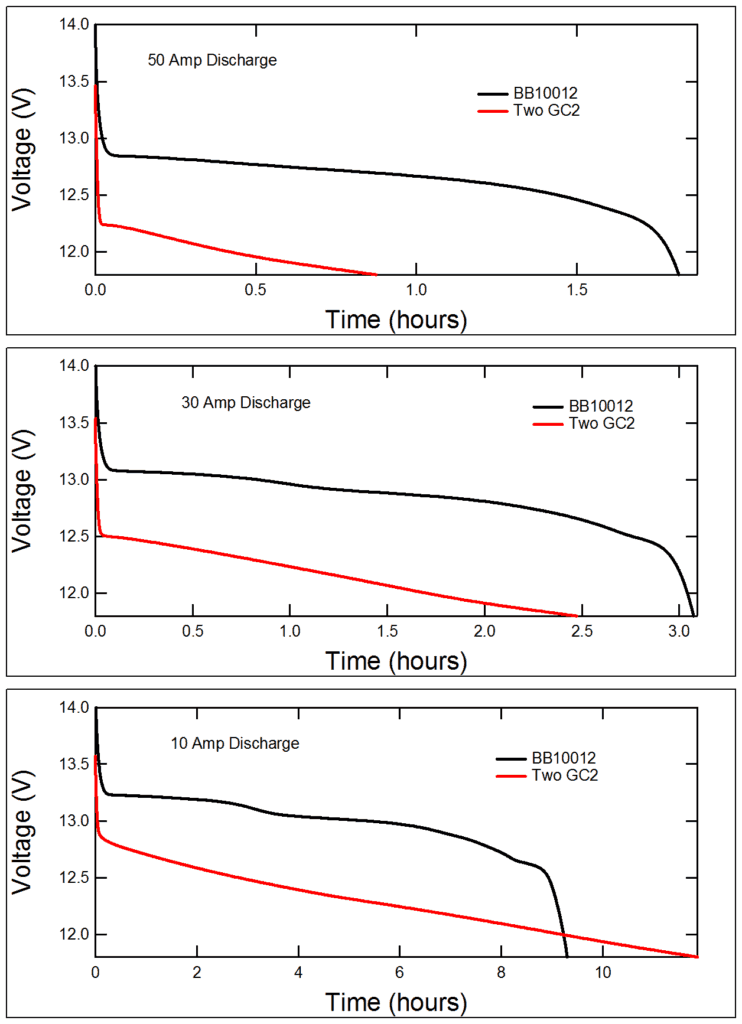 Figure 3, below, shows the cumulative delivered charge and energy over the discharge curves for all 3 discharge current tests. What is immediately clear from the figure is the known Peukert effect in lead acid batteries. The usable capacity drops from 120 Ah at 10 A to 40 Ah at 50 A for the GC2 batteries – despite their capacity rating of 230 Ah. By contrast, the BB10012 pack remains within several percent of 100 Ah, independent of the discharge rate. The slight drop in capacity with current is entirely due to the ohmic voltage drop during discharge. 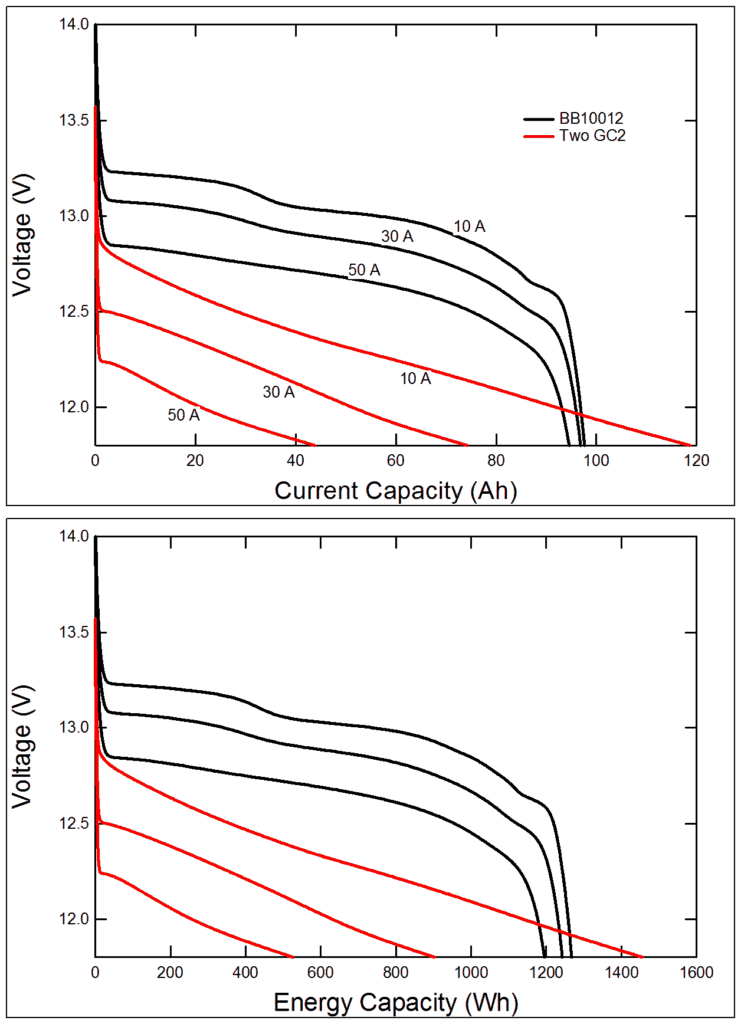 Finally, Figure 4 below shows the head-to-head comparison of the charging profiles. In this test, a charging current of 40 A was used with a bulk and absorption voltage of 14.4 V. Absorption was allowed to continue until the charging current fell below 3 Amps. What is evident from the figure is that the LiFePO4 BB10012 pack charges completely in less than half the time as the GC2s (2.5 hours compared to 5 hours), even with the identical charging parameters. The reasoning is that internal resistance of li-ion batteries is much lower, and so the high-current bulk charging phase can continue for longer. Therefore, less time is needed for absorption. 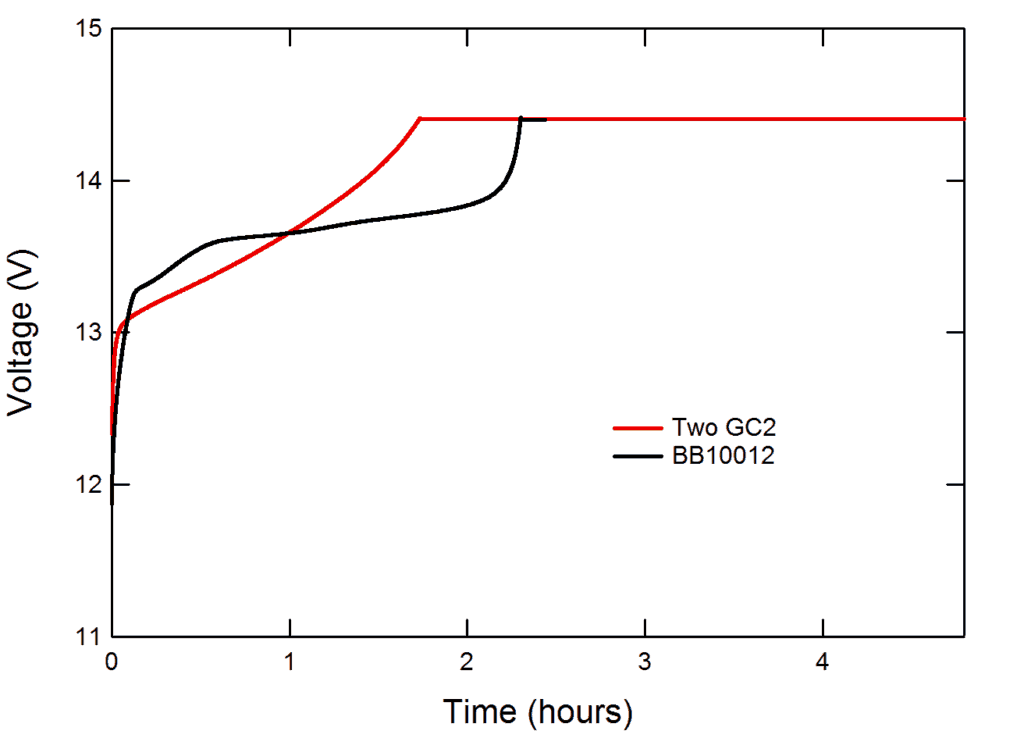