Are you Adventure Driven? Adventure Driven is a professional photography and content providing power couple that focus on an overland and adventure lifestyle. Seth and Kande are the people behind Adventure Driven, and are well known in the overland community. Their ultimate goal is to encourage others to live a life they love. The adventuring soulmates met through a mutual friend and have been married since May of 1994.  Since they got married, they have loved being self-employed and work hard together every day. Despite having owned and sold several different types of businesses (from janitorial to landscaping to technology), none have spoken to their hearts quite like Adventure Driven has.

Not only are they living their ideal life, they also work with a company called Mine Data out of Prescott, Arizona. In summary, their job description for Mine Data is to go hike remote areas where there are available mining claims, they then stake them and test them for gold. Kande is the lead cartographer while Seth is the lead photographer to record details about the mining claims Mine Data sells. 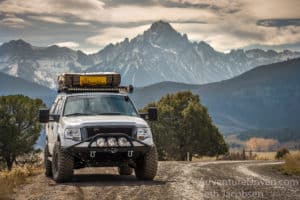 As a child, Seth spent most of his time learning photography skills from his grandfather, and as he got older, he found passion for nature and adventure photography. His photography has been published in places like the Overland Journal, Tracks Magazine, and plenty more! Kande, his wife of 24 years, was brought up by adventurous parents who took her hiking parts of the Appalachian Trail at two years old! She enjoys all types of outdoor fun, but her first love was mountain endurance horse riding. “My first love is horses and I used to barrel race and train them for endurance racing over the TN mountains. I did a few motocross races, but mostly love riding around the desert and trails for fun.”

Most recently, Kande had the privilege of participating in the Rebelle Rally as the navigator for a team called the Squirrel Girls with her team mate and driver, Nena Barlow. The Rebelle Rally is a week-long all-female off road, old school map and compass navigation competition that covers about 1300 miles of the American West. No cell phones, GPS or other electronics allowed! “Nena and I were sponsored by RAM Trucks, and entered the Rebelle Rally in the Bone Stock class with a show room stock RAM Rebel. We won first place in our class and 3rd overall. We had a pretty bad wreck in the dunes, both of us ended up with whiplash and were detained for a couple hours by the medical staff. The Rebel had minimal damage and we were able to continue competing after the medical staff checked us out (and Nena zip tied and duct taped the truck back together). It was an amazing, life-changing, grueling, empowering, rewarding,and  exciting experience that I encourage any adventurous woman to do at least once regardless of their off-road experience,” she explains. 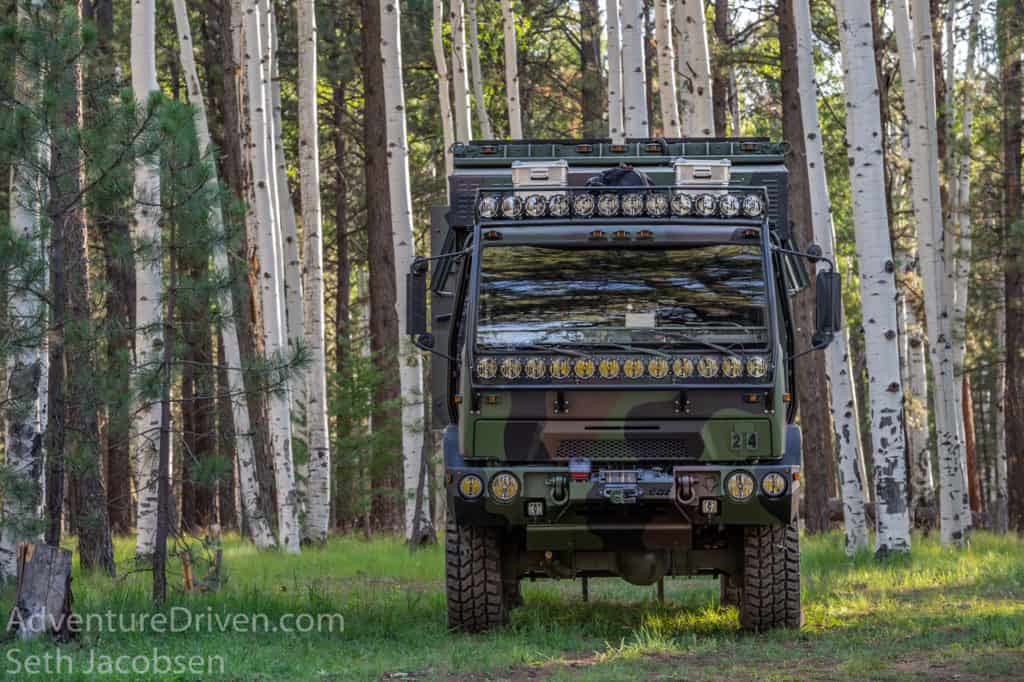 Together the couple has a 1994 M1079 military truck called “Brutus.” Brutus has been an unexpected adventure: when they first discussed about living on the road, they actually considered a C Class RV.

They wanted something they could be comfortable in rather than camping in a tent while out working for Mine Data. “We wanted a more convenient place to work on our laptops, do mapping and have a nice hot indoor shower after getting gritty all day. What we quickly realized is that C Class RVs are not super capable off-road and  would rattle apart sooner than later in the crazy conditions we would need it to go through. The big awesome jumping MANN and Kamaz trucks that race in the Dakar Rally inspired us to get Brutus and do a combo fun off-road adventure truck/RV. Actually, I asked Seth for Brutus for our 23rd anniversary, next thing I know it showed up on a low boy trailer in front of our house; over 1.5 years later, lots of garage time & bloody knuckles we are finally rounding up on Brutus’s completion with just a few things left to do before he is totally off-grid ready,” explained Kande. Brutus currently has six 100 Ah 12 V deep cycle lithium ion batteries that powers their 4000 W Magnum inverter, so they can charge their camera gear and power their AC whenever desired. 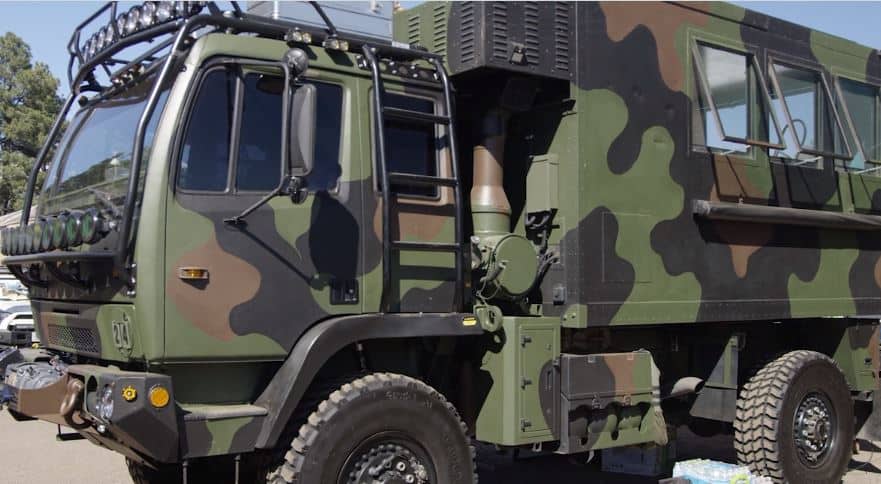 Eventually they hope to finish building out the camper interior by designing and installing a queen-sized bed that raises and lowers from the ceiling over the dinette, implement interior LED lighting, do the plumbing and water heating system, install a shower and hit the road wherever adventure leads them. Living on the road has brought unexpected adventures for Seth and Kande. They have learned to appreciate everything by taking the time to stop and take it all in. While people might think that being together all the time could be difficult, the couple reminds us to stay strong, “don’t take each other too seriously! Make each other laugh a lot, be patient, kind, loving, appreciative, forgiving, and respect one another.”

Looking into the future with Atlas 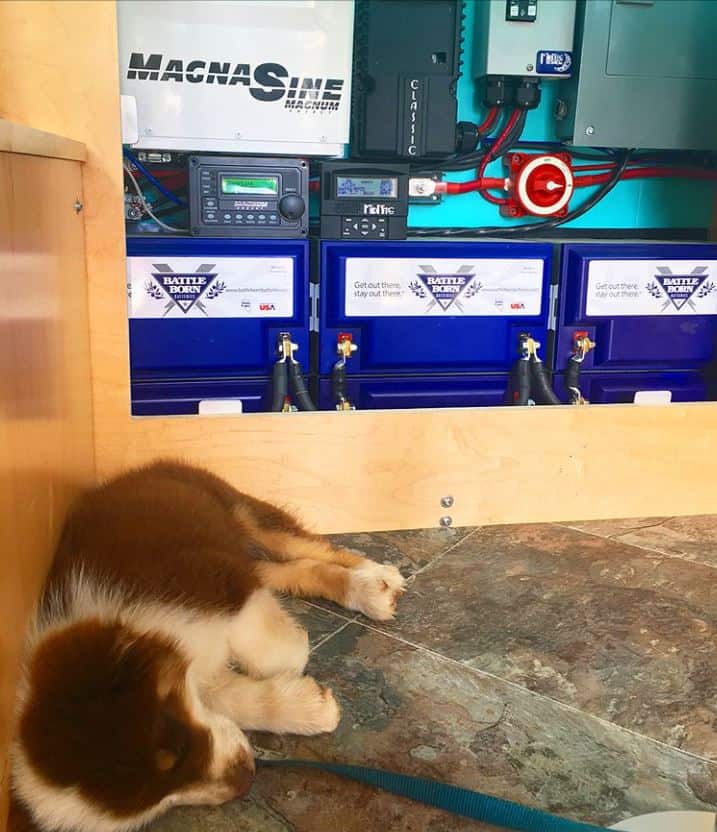 Recently, their family has a new Adventure Driven teammate and owner of their hearts, a puppy named Atlas. He came into their lives unexpectedly after they met his brother Archer in Salt Lake City at Equipt Expedition Outfitters on their journey to finish building Brutus.

Now feeling complete, they cannot express their feelings enough, “we have found happiness, excitement and joy by not being afraid to ‘break out of the box,’ we’ve taken several chances away from what is considered the ‘normal American way of life,’ we try to live simply and with purpose so we can spend more time adventuring and we try to live in a way that encourages people to also search for and live whatever way makes them happy, as long as it doesn’t harm others of course.”

So far their most favorite place they’ve visited so far is the Rocky Mountains. Baja Sur on the Sea of Cortez side is a runner up, but there are so many places to love that it is not possible to choose one single place. They happily told us more about the future, “we love our beautiful planet and look forward to experiencing and exploring it more. The possibilities are endless!”