Brian and Erin, of BE Adventure Partners, left their life of international travel behind to take on a custom Skoolie build. They gutted their Skoolie and turned it into their dream home on wheels. Now they’re on an adventure from Canada to the U.S. looking for a place to set up their homestead. 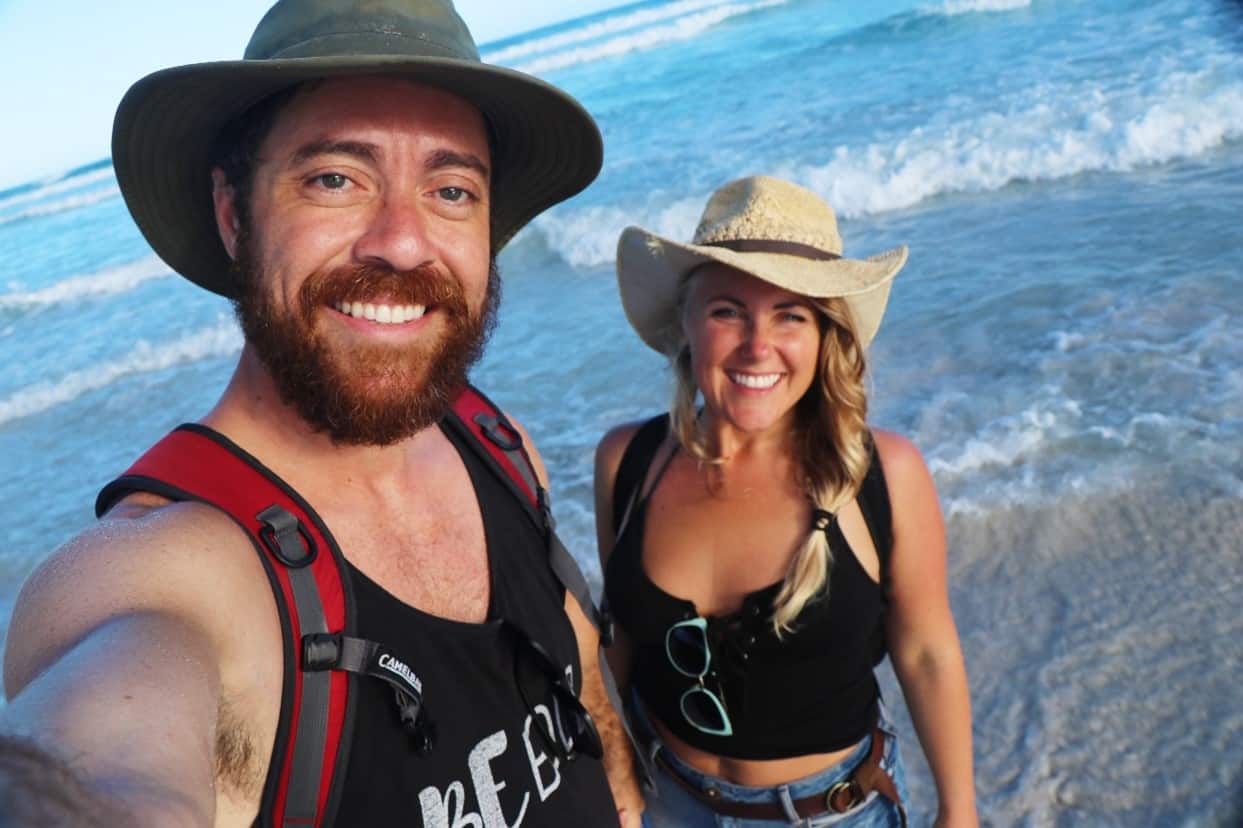 Brian is from Austin, Texas and Erin is from Toronto, Canada. When Brian and Erin met online, they were living 1,555 miles apart. After a few months of talking online, Erin was attending a professional development event on a 10-day cruise to the Canary Islands. To her surprise, Brian offered to go with her when she told him she had no one to go with.

Brian and Erin met in person for the first time on June 2, 2016. They both flew across the world to meet at Heathrow Airport in London, England before setting out on their 15-day travel adventure. After only knowing each other online, they took a huge risk meeting for the first time before they would be together at sea.

There are countless ways this meet up could have gone, but Brian and Erin both had hope they would click the same way they did online. Erin said that the moment they met, Brian scooped her off her feet (literally) and she’s been hooked on him ever since.

After their first trip together, Brian and Erin returned to their hometowns and respective lives. Brian was a firefighter in Texas, and Erin was developing an online business while working from home as a professional hairstylist. Even the distance and their separate lives couldn’t keep them apart. In the 10 months following their first meeting, they flew all over the world to travel together and went to seven different countries.

In April of 2017, Brian and Erin both sold their houses and most of their belongings to travel the world together. They set off on full-time travel and ended up going to a total of 19 countries together. Out of all 19 countries, Ecuador, Nicaragua, Costa Rica, and Mexico were their absolute favorites.

One of Brian and Erin’s favorite travel memories was their time spend in Ecuador. Erin said that “Ecuador is one of the most beautiful countries on the planet!” Their favorite part of Ecuador was that they could be up 22,000 feet above sea level in cold, snowy mountains and then two hours later be on a hot, sandy coast. During their time in Ecuador, Brian and Erin drove around in a Jeep 4×4, flew over the Amazon Rain Forrest, tubbed down the Napo River, and spent an afternoon with indigenous Kichwa Waysa Wasi Tribe.

Another memorable travel moment was hiking to the Ciudad Perdida (The Lost City) in Columbia, where the two loved hiking through the jungle, seeing the wildlife, and meeting the local Koguis People from the Sierra Nevada Mountain Range. Swimming with sea lions in the Galapagos was another magical experience Brian and Erin will never forget. From International Travel to A Home on Wheels

Brian and Erin spent 3 years traveling non-stop. While they loved traveling, they were getting tired of staying in Airbnb’s and living out of their carry-on backpacks. After staying in over 52 different rental places during their travels, they learned that not every place they stayed would be the perfect fit for them.

Eventually, Brian and Erin began exploring options that would still allow them to travel full-time, but also have more of the comforts of home than a backpack can offer. Initially, they investigated purchasing a van to live in full-time. After further research, Brian and Erin determined a van would be too small and they kept looking for other options.

Upon looking into Skoolies, Brian and Erin immediately fell in love with the idea. After 6 months of research, they headed to Phoenix, Arizona to purchase their 1997 Thomas Skoolie, then began the process of their custom build to turn the Skoolie into a home. Brian and Erin gutted the Skoolie and did their entire build on their own. Amid adding in plumbing, subfloors, and walls, Brian and Erin installed their electrical system. It is made up of 6 BB10012 Batteries, 1 SmartSolar 150/60 MPPT SCC, 1 Victron 3000w Multiplus Inverter, and a Victron BMV 712 Battery Monitor and Smart Dongle. According to Brian and Erin, their new Battle Born Battery system made “life on the road do-able!”

The freedom of being able to park wherever they want made all the difference. Brian and Erin love cooking and with their Battle Born Batteries as they aren’t limited to what appliances they can use. Since completing their build, the kitchen has become their favorite part, both loving using their air fryer and induction cooktop to make gourmet meals.

The electric advantages didn’t stop there. Erin said that if something in their Skoolie is electric, their Battle Born Batteries are running it. They power a washing machine, hair dryer, curling iron, regular heater and water heater, and all their lights, and they’re in love with having the comforts of home available to them anywhere they can go.

Solar power was an essential part of Brian and Erin’s build. In order to boondock and live off the grid, they needed reliable, renewable energy, but this proved to be a bit of a challenge at first. Winter can be a difficult time to run off solar power when the days are often gray and stormy, and the sun’s rays are far away.

It’s especially difficult to get solar power when the panels being used aren’t in an optimal position. Brian and Erin started off on their first winter trek with their solar panels lying flat where they were only getting about 20-30% of the charge for the entire day. To improve this, they tilted two of the panels on their driver’s side up. This significantly boosted their solar charge up to 700W, yet they still had to run their generator to supplement their power usage and keep their batteries topped off.

Finally, Brian and Erin decided to bridge their panels together and now have all four panels at the appropriate angle for their latitude. This has given them the ability to collect all 1320W available from their current solar array. Erin even said that as of 11:30am one morning, they were already collecting over 1200W of solar. They’re so excited to be able to collect solar rays in mid-winter that match what they were collecting in the summer!

The Rewards of Life on a Skoolie One of the most rewarding parts of Skoolie life for Brian and Erin is how much they have grown as a couple. They have learned how to work together well to allow their home to run smoothly. Together, they are constantly testing new ideas to improve their home and their life on the road.

Brian and Erin love living in their Skoolie! Having the ability to go wherever, whenever is something they’ve always dreamed of. They love the simplicity of not having a bunch of extra items and say the Skoolie has helped them to eliminate the clutter from their life.

The Skoolie life has been perfect for Brian and Erin’s lifestyle. They love being outside, exploring nature, hiking, and soaking up sunshine. Having a home on wheels gives them the freedom to travel full-time and go places where they can be fully immersed in nature.

What’s Next for Brian and Erin?

In September of last year, Brian and Erin got engaged, and on January 13, 2022, they officially became husband and wife. As newlyweds, they have set off on their adventure to find a homestead and have recently decided to put down roots in the Ozarks of Missouri. They’re currently embarking on an adventure to become food and power sovereign. The latest project Brian and Erin have embarked on is building their workshop, and they are currently using their Battle Borns to run several power tools and a cement mixer for the new addition to their homestead. Eventually, they’ll have an entire workshop with optimal space to take on more projects.

Despite planning to stay on the homestead for the near future, Brian and Erin say their “Skoolie will always have wheels, and we will always be lovers of travel.” Their next travel dream is go down through some of their favorite countries in Central and South America.