Here at Battle Born Batteries, our team partners with anglers across the country. Ian Branson, a Virginia native, is no exception. He’s been working hard and competing in different fishing divisions and has lofty goals for his angling career. We’re proud to power the bass boat that helps him get out there on the lakes, rivers, and ponds, and stay out there.

Ever since Ian was a kid, he was interested in the sport of fishing. He’d often ask his parents to drop him off at ponds and rivers or rode his bike to any fishery in the area. His uncle was the only other person in the family interested in fishing, specifically catfishing, as the rest of his family members enjoyed water sports. He always carried a fishing rod and grew up watching Bill Dance on television. When Ian went to college, he studied to become a police officer and worked at a hospital while still in school. There he met several coworkers with bass boats, all of whom were in a fishing club. At that time, Ian was able to work more to improve his fishing skills. Ian believes that fishing takes more than luck, it’s a craft that takes time and effort. During tournaments, he feels confident in participating in multiple days of fishing because of our LiFePO4 technology that powers his bass boat.

A new circuit that Ian is fishing in is the Bass Fishing Leagues, a higher-level series, and the Big Bass Tours. He likes how the Big Bass Tours, hosted by Cabela’s, allows for competitors to weigh one fish per hour and text you when it’s your time to begin fishing.

“Work to fish, don’t fish to work,” Ian said. “It takes work, time and dedication to fish and make your way to the [Bassmaster] Opens!”

One of the most memorable moments in his career (and lifetime!) was meeting his fishing idol and fellow Battle Born Batteries powered angler Rick Clunn. He describes meeting Rick as the true turning point in his career and pushed him to get even more dedicated to the sport.

Currently, Ian has a 36V system rig with a 2013 Ranger Z119 powered by a 225hp Mercury ProXS. Running 3 BB10012 Battle Born Batteries, Ian is always busy on the water and has never needed to winterize his bass boat. He first connected with our team at a Sportsman’s Warehouse event and met our COO Sean. Ian said that Sean told him to “beat our batteries to hell and back” in his system, and he loves pushing the limits in his fishing vessel.

Ian likes how our batteries have a 10-year warranty and he knows the capabilities of lead-acid batteries typically are up after a year and a half. He also noticed how after upgrading his boat, it lasts longer and feels lighter on the water.

He recalled a competition where he forgot to charge his boat but went out three days in a row fishing, and still had plenty of power. Going one full day without charging his system is something that would have never been able to do if his rig was outfitted with bulky and outdated lead-acid battery technology!

What’s Next for Ian? 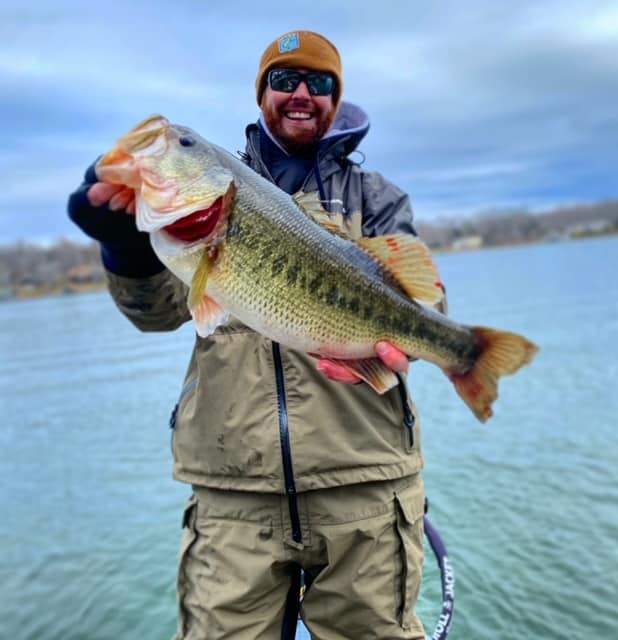 Overall, Ian enjoys being able to drive his own bass boat and make his own decisions out on the water. He’s always happy to take his friends out for a day of peace, relaxation and the chance to reel in some great catches. As for his dream catch, Ian’s goal is to catch a “big bag” in a series tournament and win his first BFL or Classic event from it! Setting goals and catching the biggest bass he can is always a really good way for him to improve in his career.

When it comes to advice, Ian suggests to other young anglers that you’ll have to start low and eventually with enough hard work, time, and dedication, you can make it in the industry. He worked on his own but also had the support of his parents for his career. He also makes sure to find good folks to help with sponsorships and suggests that making connections when starting out is essential.

He’s looking forward to participating in any and every type of fishing tournament he can find. He is especially grateful that the fishing industry is doing well, from rod and bait sales to the increase in fishing licenses! When he isn’t fishing, he’s rescuing homes and businesses through pest control and spreading the great word about our batteries to anyone looking to get out there and stay out there.

Follow Ian on his Instagram, and the Battle Born Batteries team wishes him luck with his upcoming competitions!