Teal, Linh, Emma, and their Yorkshire Terrier, Compass, are a family of four exploring the world on the water. They live full-time on a 1993 custom-built 435 Featherlight Catamaran named S/V bāsik, and love sailing from island to island, exploring new cultures, and meeting fellow sailors.

Meet the Crew of the S/V bāsik 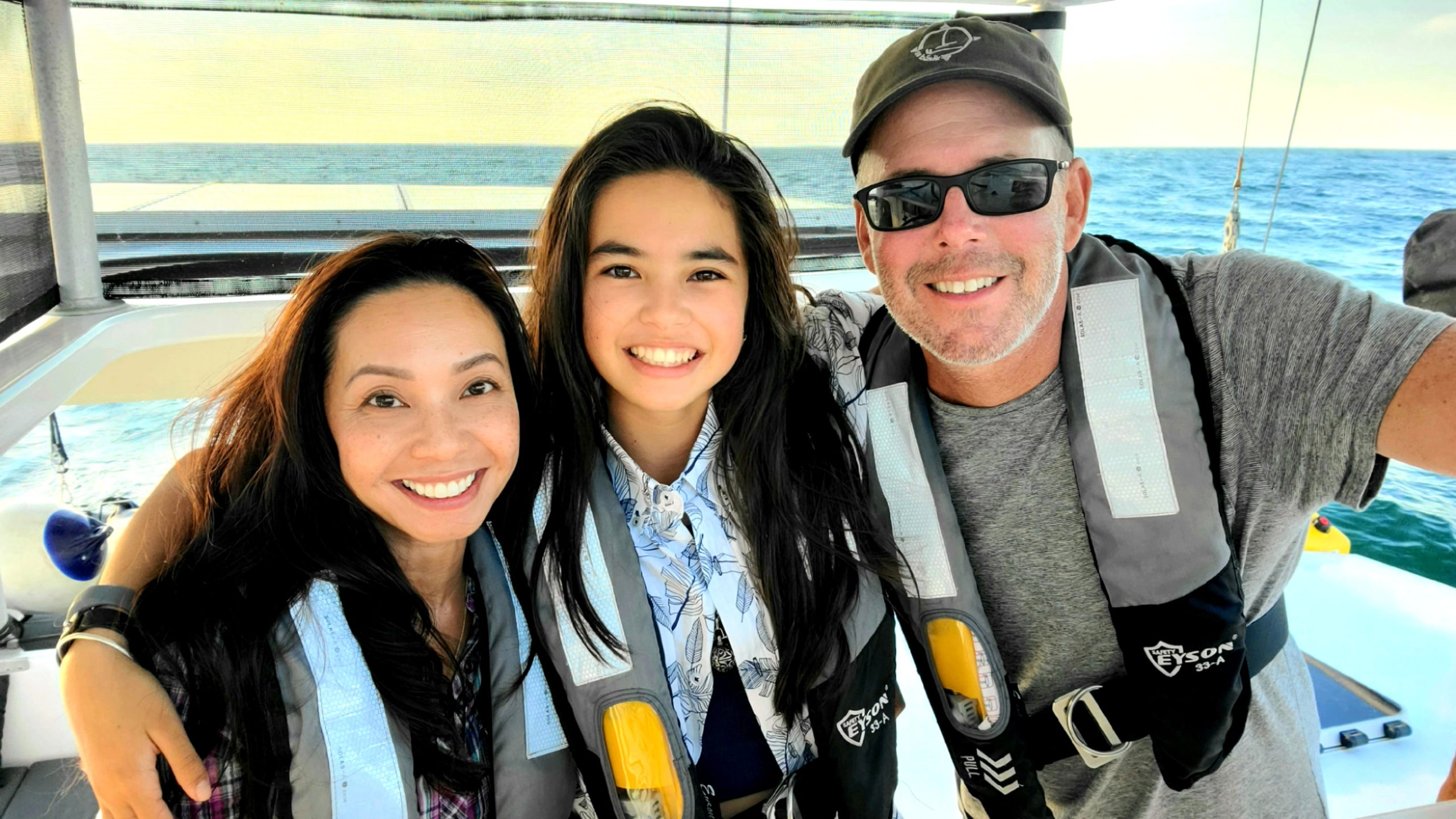 It was late summer in 1999, Teal and Linh Goben were young and newly married and they just returned home from a sailing trip on Lake Washington. This was Linh’s first sailing experience and at the time she didn’t even know how to swim, but on the way home she asked Teal what he thought about buying their own boat. Teal grew up sailing with his dad and loved being out on the water, and although he was surprised at Linh’s interest, he enthusiastically began researching sailboats as soon as they got home that evening.

During their research, Teal and Linh realized their dream boat, a 45’ Catamaran, was outside the realm of possibility as young newlyweds. So with a realistic budget in mind, Teal searched through boats until one morning he came across a 1998 41’ Custom Trimaran. Teal immediately put in an offer and it was accepted! Even though it was October, Teal picked up the boat in San Francisco, California and made the cold and treacherous sail north. Linh joined the journey halfway through and they finally made it to their port in Seattle where they spent the winter living aboard the boat while refitting it.

Following a winter on the boat in Seattle, Teal and Linh were ready to head south. That spring, Teal got a job transfer to Sacramento and they moved the boat to a port in Stockton, California. Over the next two years, the couple worked full-time while continuing to refit the sailboat until they were ready to set out on the open water. They both left their jobs and began their first sailing adventure.

A Dream of Full-Time Sailing

As they entered full-time sailing life, Teal and Linh slowly made their way down the coast of California, never straying too far from the comfort of being close to shore. While they were enjoying their time meandering down the coast, Teal and Linh knew if they didn’t kickstart their life at sea, they would always find another project that needed to be done or another excuse not to leave. They decided to sign up for the “Baja Ha-Ha” Cruisers Rally that went from San Diego to Cabo San Lucas. Partaking in this rally meant that Teal and Linh would be sailing non-stop as they traveled from checkpoint to checkpoint and tried to keep up with the other sailboats. When they finally set sail from San Diego, there was no turning back. Despite some initial challenges and last-minute repairs along the way, by the time Teal and Linh arrived in Cabo San Lucas, they had completely fallen in love with sailing. They spent the next three and half years sailing through the Sea of Cortez exploring small islands and popular tourist destinations. Eventually, when they’re savings began to dwindle, they knew it was time to head back to the US, start a family, and replenish they’re funds. They sold their sailboat and moved back to Ellensburg, Washington.

Back in Washington, Teal started his own carpentry business and Linh got her Real Estate license to begin her career in Title and Escrow. In 2007, Teal and Linh welcomed their daughter Emma into the world and continued working and saving until they were ready to purchase another boat. When they began shopping for boats, they found the perfect 1993 435 Featherlight Catamaran and were lucky enough to put in an offer that was accepted. After moving the boat to their port in Seattle, Teal spent a year commuting from Ellensburg every weekend to refit the boat. Once the boat was livable, the family moved onboard, Linh continued working in Seattle, Teal worked on the boat and ran a lumber brokerage, and Emma went to school. Although Teal and Linh had been dreaming about returning to their life at sea, they took their time working on the boat ensuring everything was done well and not rushed. They also put a huge emphasis on Emma’s education and wanted to make sure she had a solid foundation and was able to continue her studies while at sea. The Gobens weren’t in a rush, but as the boat grew closer to being finished, they were looking forward to sharing their previous life of travel and adventure with their daughter, in their new boat.

Refitting and Building Out the S/V bāsik

Once Emma was doing online school and the boat was ready, the Goben family set out on the maiden voyage of the S/V bāsik and left Seattle. They spent the next fourteen months enjoying all the work they had put in refitting the boat and saving up for their life at sea. The custom galley (kitchen) that Teal put in is Linh’s favorite part of the S/V bāsik and they love that there is no other boat like it. Having a sailboat that is spacious yet light is perfect for full-time sailing. Despite how much they loved the initial refitting of the S/V bāsik, the Gobens decided it was time to hull the boat out again and do some much-needed upgrades. They began their upgrades with some important routine maintenance to the engine, repainting the exterior, and repairing the rudders. Next, they began on the technical upgrades by adding hydraulic steering, installed a new heating system, and replace the boom with a new Seldon spar. Finally, the Gobens replaced their headsail, added a hardtop roof-deck with outdoor lighting, and upgraded to Raymarine Quantum Q24C Radar. After months of hard work and a newly refinished S/V bāsik, there was one final upgrade they needed to complete before setting sail again.

In their previous sailboat and in bāsik, the electrical system was comprised of lead acid batteries. This system left Teal and Linh constantly struggling with battery anxiety, always checking their consumption, and worrying about if they would be able to top of their batteries before the day ended. Unable to trust their electrical system, the Gobens knew they needed to make a change and upgraded to a Battle Born Battery-powered electrical system consisting of the following components: Even though their new batteries have less told amp hours than their lead acids, the batteries are completely topped off by 9am every single day, even with normal usage. With their upgraded electrical system, the Gobens have even switched many of their cooking appliances over to electric to save on propane and utilize more renewable energy. “We never have to worry about having enough power for our needs. Battle Born has been a complete game changer for our lifestyle.”

Living the Onboard Lifestyle

With a new electrical system and completed upgrades, the Goben family left port to live the onboard lifestyle. They love living on the water, and despite the ups and downs of boat life, they wouldn’t trade it for anything. Their favorite part of sailing full-time is getting to explore new places and be a part of the sailing community. One of Teal and Linh’s favorite sailing memories truly illustrates the kindness of their fellow sailors. The couple had just finished a long passage and were tired and hungry when, “out of nowhere a fellow mariner kayaked over to us and gave us 2 freshly speared lobsters for dinner.” The sense of community and willingness of other sailors to lend a hand played a major role in drawing the Gobens back to full-time life at sea. While on the water, Linh enjoys cooking and learning new recipes, Teal loves go fishing, and Emma spends her free time reading and practicing her violin. As a 14-year-old, Emma also spends much of her time at sea working on her studies. Teal and Linh strive to incorporate their travels into Emma’s schooling, allowing her to experience many things firsthand, rather than just reading about them in books. Emma is also a key member of the S/V bāsik crew, she’s been learning the rules of the water since she was a toddler and has recently become a semi-pro net controller for the VHF. Although it can be challenging, Teal and Linh love the opportunities and experiences raising their daughter on a boat has allowed them to have.

In addition to the three main crew members, the S/V bāsik is also home to Compass, the Goben’s 6-year-old Yorkshire Terroir. Linh describes Compass’s life at sea as “living the dream”. While he passes most of his time napping on deck, he also works hard patrolling the decks of S/V bāsik, keeping the crew safe. Like Emma, he grew up onboard and loves every minute of sailing life, especially dinghy rides to the beach! Where is the S/V bāsik Headed Next?

S/V bāsik spent the winter sailing along the Pacific Mexican Coast. Their route began in Cabo San Lucas and from there, they sailed south, traversing across the Sea of Cortez hitting as many anchorages as they can. They love the sea and wildlife along the coast and venturing onto various islands enjoying the Mexican culture and cuisine, especially Isla San Francisco.

Next up on the Goben’s travelling agenda is heading north back through the Sea of Cortez. They’re looking forward to exploring the remote islands along their route including Espiritu Santo and Isla Partida. To keep up with their upcoming travels checkout Onboard Lifestyle on Instagram, Facebook, YouTube, and their website.